Things To Read That Might Not Suck: You Can Never Have Enough World. B Free Edition 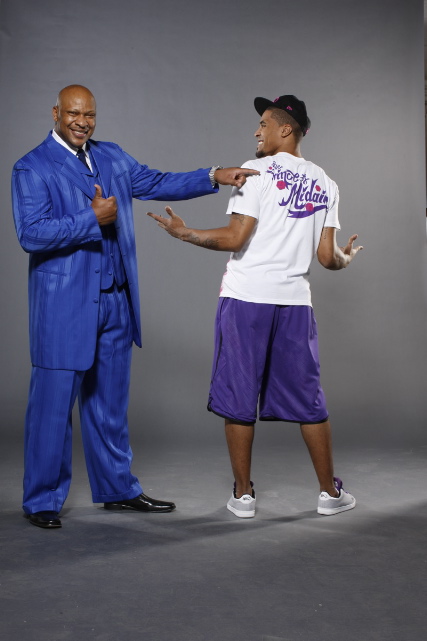 "Groundbreaking. Thoroughly enjoyable. A family-friendly fun ride through the world of sports imagination." — The Editor of this sports blog.

— We featured K1X's upcoming summer line, which is entirely created around and inspired by World B. Free, the other day. Today, here's a link to an extensive and entertaining interview with the man himself where Free discusses Rucker Park, the NBA, and why he always shot so damn much. An excerpt:

FREE: George “Iceman” Gervin. He was one of the best players I ever played against. When this man was rolling, and this was like every game, he could get 50 on you in a half—and not even break a sweat. And that’s why they call him “The Iceman.” I asked him about that and he just said “World, I just scored 60 on you, and I’m not even sweating.” [Laughs]

K1X: What about your own quote, “passes don’t get paid”?

FREE: Uhh, I got that from Fred Carter. When I was a rookie he came to me and said, “Rook, let me tell you something: In this League, passes don’t get paid. Passes do not get paid.” And that stuck with me as soon as I stepped on the basketball court. It wasn’t my own theory, though. I got it from a veteran. There could be five guys open and he would still not pass it to you. [Laughs] (Slam online)

— In case you ever wondered, LeBron doesn't really sing in the shower, is listening to "Urban Legend" from the soon to be incarcerated TI right now, and thinks 50 Cent and Rick Ross should throw down. (CNNSI.com)

— A very well thought out post on the problems the Cavs face in regards to the rotation among their big men once Ben Wallace returns.

So perhaps the chemistry will be the bigger issue. But if you’re considering chemistry on the team as a whole, you should also consider chemistry on an individual level as well. Particularly, the chemistry between LeBron James and Anderson Varejao is key. With Andy at the 4, the Cavaliers’ offense has been playing some of the best, most efficient offensive basketball of the season. Assists are up and turnovers are way down. The ball movement has been the best its been all year.

(Waiting For Next Year)

— Man arrested for a DUI while driving a motorized barstool. Genius. (Columbus Dispatch)