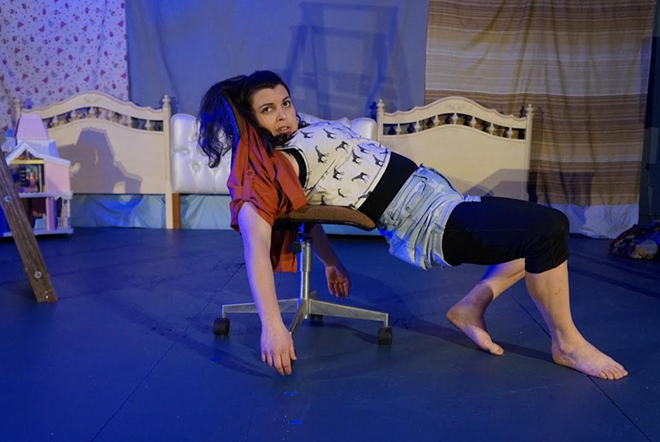 If you’re going to write a one-woman play that is largely about drinking and vomiting, it helps if you’re an engaging and at times electric actor. Thankfully, that’s what writer-performer Amy Schwabauer has going for her in this apparently autobiographical journey through bottles of wine, whiskey and cans of beer to supposed self-understanding.

Along the way, in a fairly randomly arranged series of vignettes, most of them wryly amusing, she touches on aspects of her life and traumas of various sizes (her granddad’s suicide, her inability to land a boyfriend, the pain of losing her dog Scout). Utilizing a tall stepladder, a desk and a couple other pieces of furniture and some props, Schwabauer manages to keep her personal skein of miseries, disappointments and small joys quite interesting. Up to a point.

But somewhere about the one-hour mark of this 80-minute one act, when we’ve had several vomiting events (most expelled from mouth, one swallowed), that particular dramatic device begins to feel more pathological than theatrical. And while the playwright’s courage with self revelation is bracing, the puking becomes overkill after a while.

That’s too bad, since actor Schwabauer definitely commands the stage and can tell an anecdote with flair and, yes, subtlety—whenever playwright Schwabauer permits her the opportunity. Early on, her recollections of her star turn as a six-year-old at her teenage brother’s party is a hoot. And her continuing reflections about a lonesome whale and the wintering habits of koi fish show potential as interesting metaphors.

But just when you’re about to get drawn in to the story of this young woman and her battle against multiple insecurities, here comes another drinking jag and another puke. Those showy moments tend overshadow the pieces that actually work better, giving the entire work a veneer of repetitiveness.

And then, Schwabauer falls into the trap that snags many young writers when she decides to wrap it all up with a neat moral at the end—“Just like yourself more!”—instead of leaving the lessons for the audience to discover.

Still, Schwabauer is very talented and she will no doubt find better vehicles in the future that don’t “throw up” so many obstacles.

This Is NOT About My Dead Dog
Through January 28, produced by Playwrights Local at Creative Space at Waterloo Arts, 397 East 156 St., playwrightslocal.org.