Today: Hearing Under Way on Flag-Burning Charges for RNC Protesters 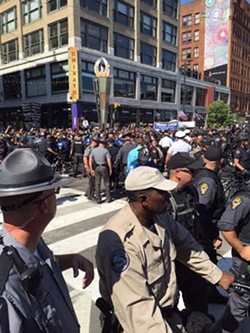 VINCE GRZEGOREK
Today, 12 defendants are seeking a response from a Cleveland Municipal judge who is mulling motions to dismiss the charges against them in relation to a flag-burning protest during the Republican National Convention last year.

On Jan. 11, a judge dismissed charges against two defendants. (Greg "Joey" Johnson, the named defendant in the 1989 U.S. Supreme Court case that established flag-burning as a protected right, was one of those defendants whose charges were dropped.)

Police Chief Calvin Williams has been subpoenaed to testify during today's hearing.

Scene was at the flag burning protest on July 20, 2016, and we reported a few hours later that the whole thing had the zeal of sensationalized news coverage around it. Cameras and police badges outnumbered the protesters by about a bajillion to one, and it was the crush of video cameras that prompted the police to intervene and pull the rug out from under the protesters (and then arrest them immediately). Reporters were prevented from gathering any information worth a damn, and the scene was cleared. (RNC attendees and delegates were the only ones allowed through the intersection of East 4th and Prospect in the wake of the protest.)

As an RNC 14 attorney points out: "[Today's] hearing is the first of its kind following Donald Trump's inauguration and his notorious tweets that protesters who burn the American flag should be punished with loss of citizenship or a year in jail.

VINCE GRZEGOREK
"This content-based policing is unconstitutional and utterly unacceptable. The Ohio Chapter of the National Lawyers Guild stands in solidarity with progressive and leftist protesters who attempted – and were prevented from - the exercise of their free speech rights,” Jacqueline Greene said in a public statement. She's the co-Coordinator of the Ohio Chapter of the National Lawyers Guild and a partner at Friedman & Gilbert; she was one of the lawyers who filed the motions to dismiss. “The city is frivolously spending tax dollars to prosecute these cases in an attempt to cover up the unconstitutional actions of the police."