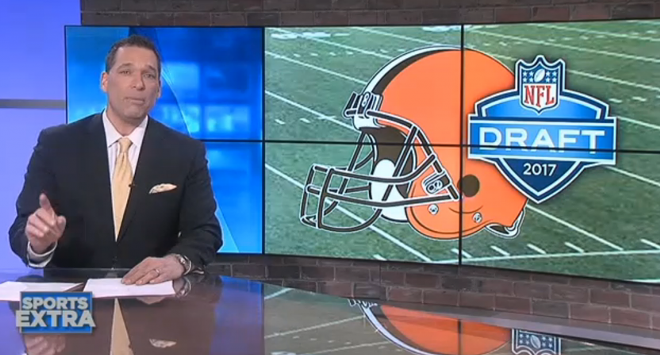 Screenshot
The NFL Draft, as seen in Kevin Costner's entirely realistic Draft Day, can get pretty dramatic — especially when it comes to the Browns. And as the time has come again for Cleveland's football team to pick another "winner," and with all the speculation about who Sashi Brown and the braintrust have their sights set on, it's time to revisit Tony Zarella's breakdown of the nonsense terminology and garbage, cliched phrases that come along with the draft. We're looking at you "value pick."

In an eloquent two and a half minute rebuke last month, Zarella took on everything from racial coding to sportscasters who seem to be making it all up.

Just look at how Zarella describes the way a team picks a player:


There’s no “franchise QB” in this draft. There never is when the Browns pick, so at No. 12 they’ll want a “safe pick” — that’s just a guy we’ve heard of. Mitch Trubisky has a “big arm,” which means he’s tall and can throw hard.

It’s all so meaningless. You don’t want to “reach” — that’s taking a guy higher than everyone else had him in their mock draft. In the middle rounds, you go “best available,” or a guy who’s not as bad as whoever is still out there. In the later rounds, you want “value” picks. Those are also just guys that we’ve heard of.

And here he breaks down some his favorite meaningless phrases:


A guy with “intangibles” has no apparent skills.

A “tweener” plays more than 1 position and isn’t good at any of them.

A “winner” was on good teams in college. It means nothing.

A “workout warrior” looks good in the uniform, but can’t play.

Watch the whole refreshing video below:


As for which lucky player the Browns will select first tonight, we've got our fingers crossed for anyone who isn't a tweener/winner/workout warrior.