She's beautiful, buff, and can kick your ass. 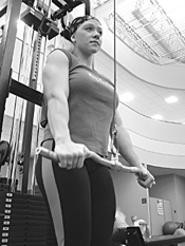 Walter Novak
Mari Kudla looks more Maxim than World's Strongest Woman.
Author Douglas Coupland once wrote that he could think of only three activities that separate humans from animals: smoking, writing, and bodybuilding.

For evidence, he could have pointed to the LifeWorks gym in Middleburg Heights at 6 a.m. on a recent Thursday. Surely animals would know better than to be lifting heavy objects at this hour.

Yet this is what Mari Kudla does almost every day. Today she straps on her lifting gloves and hefts two 25-pound dumbells. "I'm going to do some shoulder work because my massive biceps and triceps dwarf my so-so shoulders," she says half-jokingly.

For the next hour, she does exactly that. She takes a break to drink a chocolate protein shake. Then she hits the cardio machine for 45 minutes. Asked what she thinks about when working out, she says, "Getting done."

She will eat five more meals today, one every two hours. The food -- usually a protein shake or a cup of tuna -- is for fuel, not taste. She will also drink more than a gallon of water -- sometimes with sugar-free tropical Kool-Aid to break up the monotony. Such is the life of a figure competitor.

Female bodybuilders present an image of hulking he-she's, with longshoreman's arms and voices as deep as your grandfather's. That's not Kudla. At 5 foot 3 and 125 pounds, she's got big guns, but also curves in the right places, curly blond hair, and fetching blue eyes. She seems more fitting for the cover of Maxim than tossing beer kegs in ESPN's World's Strong Woman contest.

Kudla is a rising star in the nascent sport of figure, a division of bodybuilding that emphasizes a lean, feminine look over thighs the size of oak trees. The 24-year-old North Royalton native ranks fourth in the world and draws frequent mentions in Ironman, Flex, and other bodybuilding bibles.

For Kudla, it's all about self-discipline. "You realize that you're in control of what you look like," she says. "So when you look bad, you're letting yourself go. You're lazy. And no one wants to be seen as lazy."

Temptation is everywhere. Kudla can smell toast cooking in the gym's café. Her husband is a chef, but she rarely tastes his food. When her two-year-old daughter drops a Teddy Graham, Kudla must resist popping it into her mouth. She hasn't succumbed in over a month. Of that, she is proud.

"It's all denial," Kudla says. "When you're dieting like this, when you've been deprived for so long, all you can think about is food."

Working out requires a different kind of willpower: continuing when your body tells you to stop. Early in her career, Kudla learned to drown out that voice with a personal mantra. "When I used to run four miles, which is wicked for me, I would go through the list of competitors I was going to be onstage with, name them off," she says.

Kudla competes in international contests about four times a year. Under hot lights, the women strike poses that would look elegant if their fingers weren't trembling with the effort of keeping all their muscles taut.

"They are in pain," Kudla explains. "To get to that point, you've dieted all to hell. You've dried yourself out [to shed water weight]. And now you're standing onstage in five-inch heels, flexing for all you're worth, until the judges let you leave."

The judges evaluate who has the best proportion of shoulders to waist to hips, the best curve from upper back to butt. Kudla more than holds her own.

"As far as bodies go, she is one of the most symmetrical girls on the stage," says Jaime Franklin, a fellow competitor from Columbus. "She has a small waist. Her hips and shoulders are the same width, which is very pleasing. And when she competes, she's got an amazing stage presence."

Kudla had to work harder than most. In college, she took so many aerobics courses, the instructors told her she might as well teach them. Then one day she noticed a woman eating tuna straight from the can. "Why would you do such a thing?" Kudla asked.

The woman explained that she was preparing for a fitness contest. She introduced Kudla to trainer Mike Davies, who saw that Kudla has what it takes to compete. "She's got a killer work ethic," he says. "You look at her and think she'll be a total fluff chick, but she's not. She's a tomboy."

Soon, Kudla was winning amateur events. By the end of 2000, she was on the cusp of turning pro.

Then her body began to rebel. She couldn't lose the last five pounds of water weight for a photo shoot. At a promotional appearance, she felt dead on her feet. She had also missed her period.

She was pregnant. The timing couldn't have been worse. "I was getting really into my career, but my career was based on my body," she says. Still, she had always wanted a family. Competing would have to wait.

Kudla kept working out, albeit with a lighter regimen. The baby presented itself breech, which required a cesarean. She showed her doctor competition photos and instructed him to keep the scar low, so it wouldn't show onstage.

After baby Lenna was born, Kudla went back to training hard. Just eight months later, she took home the top prize at her first post-pregnancy competition. Soon after, she won at the 2002 Figure Nationals in New York, which allowed her to turn pro.

Success hasn't translated into riches. Between paying for hotels, training, and custom-made swimsuits that have cost her as much as $675, Kudla's lucky to break even. "You cannot really make a living doing this," she says. To pay the bills, she works as a personal trainer at LifeWorks.

Still, a win at next month's Arnold Classic in Columbus could provide a five-figure payday and translate into lucrative endorsement contracts. Monica Brant, a bronze, blond beauty, was one of the sport's first breakout stars and makes a good living as a fitness celebrity. Davies says Kudla has the potential to do the same.

"Right now, she's already established herself as one of the top," Davies says. "I think at some point she's going to win either the Arnold Classic or the [Figure] Olympia. I feel that in my heart, because she's young."