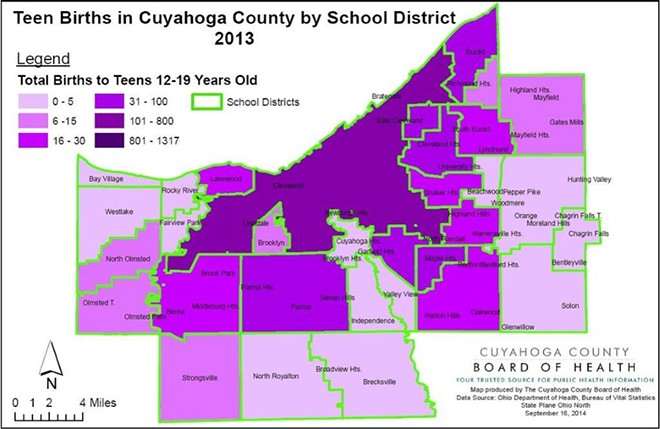 One of the more controversial – and overlooked – financial cuts made by the Trump administration so far is now being directly felt here at home as several Cuyahoga County school districts will lose out on around $2 million in funding for a federally-funded teen pregnancy prevention program.

Now, though, the grants will run out next June instead of in June 2020, cutting some $2 million in funding for schools in those seven districts.

The money funded the sex education programs for these schools and also provided funds for running the ‘216 Teens’ website, an online hub for teens 14 to 19 to learn more about reproductive health, including teen pregnancy and STDs.

On a national level, the cuts totaled over $200 million and were met with shock and derision, particularly from Democrats who blasted HHS secretary Tom Price.

The cuts will halve the number of students who would take part in the courses. Gloria Agosto Davis, program manager for Teen Pregnancy Prevention at the Cuyahoga County Board of Health, tells Scene, “We’d hope to reach at the end of the five-year period about 10,000 students. Now that the funding is cut two years shorter, we’ll probably only reach 5,000 students by the end of year three.”

One of the biggest long-term implications of the cuts means officials won’t be able to measure the impact of the program, says Davis. “We wont be able to do that in three years when we had five years, initially, to really drill down and see, does this program impact teenage births locally. It’s a huge missed opportunity for us.”

Ramona Brazille, deputy director of prevention and wellness services with the board, adds, “We’re also concerned because the other half of this is making sure people have access to reproductive health care services. It’s hanging out there that these services may be threatened. So when we have an absence of education and an absence of reproductive health services, then that doesn’t set up a great picture of where we might go on teenage pregnancy rates or unwanted pregnancy rates.”

Brazille, noting this Northeast Ohio grant was the only such federal funding anywhere in the state, says, “It was a pretty difficult grant to get. This type of funding especially at this level isn’t easy to replicate which is why we have great concerns about it being cut. It won’t be easy to replace.”

In Cuyahoga County, four of the districts — Cleveland Heights-University Heights, Richmond Heights, Euclid, and Warrensville Heights – use the funds to contract with Cleveland-based mental health company Beech Brook to provide sex education classes for students in grades 6 through 9.

Nicole Borowy-Salamon, the program manager for the Comprehensive Sex Education Department at Beech Brook, says the cuts will drastically affect what they can do in the future.

“The last two years of the grant, years four and five, we were going to look at sustainability and how can we train the teachers in these districts so that they can continue to deliver the curriculum to the students so that even when the grant is over, they can continue delivering comprehensive sex education to these students,” she says.

One of Borowy-Salamon’s concerns with the cuts to this program is that the current trend of a decrease in teen pregnancies locally will be reversed. “A lot of the kids aren’t getting sex education anywhere else,” she notes, for various reasons including budget cuts, meaning some students then won’t get any education with these cuts in funding.

The cuts are so new, that everyone is trying to figure out what to do next.

Scott Wortman, spokesman for the Cleveland Heights-University Heights school district tells Scene, “I don’t think we know at this point. The news is so fresh.”

Some of the options, according to Wortman, could include working on a new deal with Beech Brook, finding another grant that would provide the money to continue paying for the services, or simply figure out a way to cover it internally.

More than that, though, is the frustration that the biggest impact will be on the students who will now have a longer road to receiving the effective education.