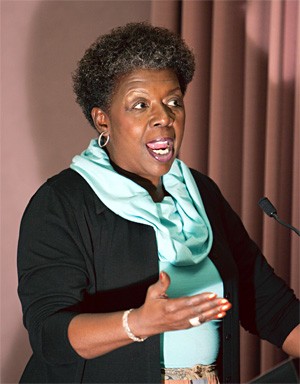 CBS News had a lot to choose from when it launched an investigation of congressional earmarks. It's a practice whereby members of Congress slip millions of dollars of worthless stuff into budget bills, without debate or oversight, charging the final tab to you, dear reader.

Yet CBS producers ultimately fell back on the safe play: If you want to highlight idiocy and government waste, come to Cleveland. It turns out our very own Stephanie Tubbs Jones is an expert on the topic.

She recently secured a $2 million earmark so Sherwin-Williams could begin development of a bacteria-killing paint, despite no evidence that it's possible. Apparently Tubbs Jones simply took the company's word that it needed $2 million in welfare to pull it off. (Today's reader tip: Send Stephanie an e-mail saying you've just invented a dog that never has to pee. That's gotta be worth at least a mil.)

Unfortunately, some experts say you'd have better luck developing a paint that makes you invisible, which Tubbs Jones could use. After she repeatedly blew off CBS' interview requests, a reporter tracked her down at her D.C. office, much to her chagrin.

"Don't you ever walk up to me like this. Young lady, turn the camera off," the good congresswoman scolded reporter Sharyl Attkisson, in a moment that would have made Carl Monday proud.

"I've been asking for an interview," the polite Attkisson began to explain before the congresswoman grabbed her wrist.

"Please take your hands off me," the reporter said calmly.

That's when Stephanie decided it probably wasn't smart to assault someone on national TV, so she broke into a smile. "OK, wanna have a conversation?" [Cue Friday the 13th music].

In her office, Tubbs Jones explained how Sherwin-Williams came to her with the idea — a proposal process similar to the way a 14-year-old kid asks his senile grandmother for 50 bucks. "All I can tell you is, Sherwin-Williams has a reputation for honesty, doing great work in my community," Tubbs Jones said. "They showed me the testing, they showed me a video, and I said, 'Let's go for it!'"

(Revised reader tip for today: When you e-mail Stephanie, make sure to include a video clip of a dog not peeing. It appears she requires rigorous evidence.)

Last week, the dynamic duo decided to raise airport cab rates to relieve congestion — or just because they wanted to do something really stupid. Under the plan, a trip downtown would go from $28 to $44 — just a dollar less than a ride from JFK to Manhattan, and exactly way more than a trip from LaGuardia into the city ($17 to $27).

It was, needless to say, a very odd move. Because of mismanagement that goes all the way back to the Kucinich administration, the airport has long underperformed, and it's about as congested as the Gund back when Lamond Murray was a marquee name. (Our apologies to the word "marquee.") Moreover, a marketing tactic that can essentially be distilled to "Fuck You, Give Us Your Money" doesn't have a history of winning over consumers.

Nonetheless, Jackson stood by Smith's plan. "This concession business model will allow us to provide quality customer service in a welcoming, professional manner," the mayor said, clutching his copy of How to Sound Less Like a Dummy for Dummies.

But then, on Monday, after realizing that there are way less obvious ways to rip people off, city officials announced that they had reversed course and would keep fares close to their current prices. Smith's plan, officials said, hadn't been approved by the mayor after all.

It was the second time this fall that the mayor blamed a City Hall blunder on the airport director, and yet another chance for Jackson, a noted presidential historian, to employ his favorite Truman-ism: "The Buck Stops Over on Brookpark Road, or Where Ever the Hell Ricky's Office Is."

This just in: It appears our doubleheader of weirdness has been elevated to a triple bill, thanks to the scientific minds at Wright-Patterson Air Force Base in Dayton. They've been honored with an Ig Nobel Peace Prize for trying to turn America's enemies gay.

Annals of Improbable Research, a periodical devoted to weird science, lauded Wright-Pat's attempt to invent a chemical weapon — aka the "Gay Bomb" — that would unleash mind-altering aphrodisiacs, rendering opposing armies Semper Fabulous. So the next time we invade a small foreign country, they'd be too worried about our feelings to attack us.

"Usually they want to put them to sleep or give them muscle relaxers, rather than turning them gay," says Edward Hammond of the Sunshine Project, an international bioweapons watchdog. He has yet to spot any rainbow shell casings, but he says the Pentagon is lying when they claim the project was never taken seriously. Hammond points to Marine Corps documents published six years ago that promote the Gay Bomb. "There's a lot of embarrassment."

(Air Force scientists refused to discuss the matter. A spokesman said they were too busy discussing new window treatments in their laboratory.)

Marc Abrahams, editor of the Annals of Improbable Research, says no one from Wright-Pat has come forward to claim the prize, perhaps because they have nothing to wear. "When you first hear it, it makes you laugh," says Abrahams. "And then for the next week, you can't get it out of your head."