Turns Out Aston Villa Fans Are Quite Similar to Browns Fans 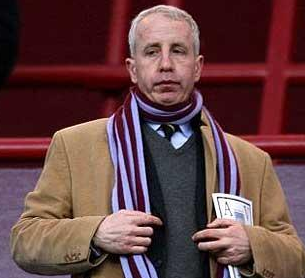 Randy Lerner went from being a mainstay at Aston Villa games in the past to being absent from almost all of them this year as he focuses on the Cleveland Browns. For all the Browns fans that call into WKNR and bitch about his soccer ownership distracting him from work on his NFL franchise, turns out there's just as many Villa fans across the pond worrying about Lerner's work with the Browns distracting him from his soccer team.

Rest assured, however, because Villa manager Martin O'Neill says that's not the case.

However, Lerner has been a notable absentee more often that not this campaign, devoting more of his time to his NFL franchise Cleveland Browns, which has caused many to question his commitment to the Villians.

Despite this, Ulsterman O'Neill has dismissed any notiong Lerner has lost his zest for the club and insists he still watches all of Villa's games back in the US.

"He [Lerner] has seen less games this season live with us than he has done before, but he has seen all the games and gets them at his home to watch," he told the Daily Mirror.

O'Neill admitted he can understand why the 47-year-old has returned to the US and has reiterated that he is still as ambitious as ever to make Villa one of the Premier League's leading 'brands'.

"I don't really have any conversations with him about the Cleveland Browns as I have enough concerns of my own here. But I don't think he has lost any ambition here because of it.