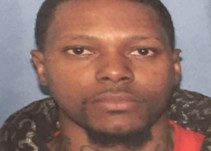 Creagh
This week, two major heroin distributors in Marion County pleaded guilty in federal court to their role in multiple overdose deaths. Eric Creagh, 32, the "main supplier," according to officials, and 27-year-old Rashawn Thomas will be sentenced later this year. (Marion is southwest of Mansfield.)

Marion Police Chief Bill Collins reflected this week on the early-2015 rash of overdose deaths in his city. "At that time, we were devastated and overwhelmed as a community," he said.

Over the course of 11 days in 2015, agents from the Drug Enforcement Administration and the Marion Metro Drug Enforcement Unit watched Creagh depart from the two houses he owned and complete a drug transaction. (Marion is southwest of Mansfield.)

During searches of Creagh's two homes, agents found multiple firearms (Creagh was a convicted felon and barred from owning guns) and equipment used to dye heroin and prepare it for distribution. In one house, agents found more than 1 kilogram of heroin cut with fentanyl.

By August 2015, investigators had confirmed the connection between Creagh's sales and a 31-year-old man's overdose death.

"If you sell heroin or fentanyl to someone and they die, we are going to come after you with a hammer that is much bigger than anything you have seen before or expected," Rendon said.