A soap star finds herself slumming in Cleveland. 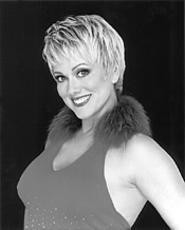 Llanview's finest smiles pretty for the camera.
Being a soap opera diva is usually a full-time gig, what with plotting revenge killings, coming down with chronic bouts of amnesia, and finding the right scarf to go with a sweater. And then there's all that running in high heels that's required to chase down another woman's husband.

Only a professional like Tonja Walker Davidson, who plays the very bad, very blond Alex Olanov Buchanan on One Life to Live, could squeeze so much scheming and conniving into a shorter workweek. The former Miss Teen All-American had about 15 years of daytime bitchiness under her rhinestone belt when she announced she wanted to cut down her hours and move from New York, where the show is filmed, to Cleveland.

That went over real well with One Life's producers. "To be living in Cleveland, Ohio, was a complete impossibility, and here I am," she chirps, sinking into a baby-blue leather couch that exactly matches the color of her eyes. Her inner tiara hasn't lost its sparkle, though her life has taken a Green Acres turn.

In 1997, Davidson was introduced to the Midwestern millionaire of her dreams at the Deepak Chopra Center for Well-Being in California. The comedic timing for a chance meeting couldn't have been better: She arrived at yoga camp fresh from a TV killing spree; he was treating himself to a spiritual superwash after his third real-life divorce.

They spent the week together, sharing deep thoughts over deep-heat treatments. A few months and five carats later, she'd warmed to the idea of moving to his Pepper Pike estate. That way, her new husband could stay near his three children from earlier marriages.

They've since added two more to their brood. "It's sort of career suicide, but we're working with it," she says valiantly. "We're staying afloat."

Now she's on One Life only a few months each year -- just long enough to destroy a marriage in the fictional exurb of Llanview or get kidnapped by midgets as she tries to infiltrate an organized crime ring.

"I think it's a good example for my kids," she says of keeping her well-manicured fingers in show business. "Especially as they get older -- to see that Mom has skills and Mom works and Mom contributes and Mom does things for herself."

No longer content just to shoot up heroin and kill people, Alex Buchanan has become more altruistic in her middle years. Now, along with boning the whole town, she's donated her bone marrow to save the lives of two babies. "One I saved a long time ago, and one I just saved last month," she says of her alter ego. "I just happened to be a bone match. Don't ask me why."

Maybe if she bribed the pope or crashed a frat party at the college of cardinals, she'd make the short list for sainthood. "She's still a sex maniac, which is good," Davidson says. "I've really tried hard to keep her intact. People do expect her to be something that rhymes with witch."

When the social whirl of Pepper Pike isn't so whirly, Davidson keeps her big personality in motion with side projects. Right now, she's putting together a one-woman cabaret act that chronicles the last five years of her life. Traveling in song and story from the vapidity of soaphood to the obscurity of motherhood, "it's really about how a nice girl like me ended up in a place like this."

The move to Ohio really threw a wrench into Davidson's celebrity, says Carolyn Hinsey, executive editor of Soap Opera Digest. "There really is no buzz about her now. I don't think Ohio is the best place to work. I'm not aware of any soaps taking place in Ohio."

When she does blow through Llanview, Davidson still gets juicy material. It seems that an ex-mob-princess who's been kidnapped by nuns, committed to a mental institution, brought forth as the 20th-century reincarnation of Cleopatra, and employed as an exotic dancer/spy is not easily forgotten.

"Tonja Walker's a little over the top, just like Alex is," says Hinsey. "She plays Alex like she really believes everything she says: 'I am the most beautiful woman in Llanview. Everyone in town wants to marry me.'"

Alex's return to Llanview last month was a real hoot, says Hinsey. "She was donating her bone marrow, and another character didn't want her to tell anyone. She said she didn't see how she could keep it a secret, because everyone would notice 'how her usual feline gait had been hampered.' Very few characters could get away with that line, but the way Tonja delivered it, it was very funny."

Davidson wants her R-rated Little Bo Peep to have a vulnerable dimension, too. "Alex always starts out, 'What can they do for me?'" she says, batting her china-doll eyelashes. "Just wants to use them, and then falls in love with them. That's her fatal flaw."

It's either keep it real, or get really bored. Davidson tried to branch out into nighttime once, but only made it as far as a couple of guest spots on T.J. Hooker and the secondary beautiful person in the made-for-TV movie Portrait of a Male Model.

Periodically, she shows up in the tabloids, confiding that her fox fur still fits when she's eight months pregnant, or that she missed her bachelorette cottage in Connecticut so much, her husband had it re-created as the fourth floor of their mansion. The next time she struts into Llanview, maybe the scriptwriters can work in some of that real-life dish.