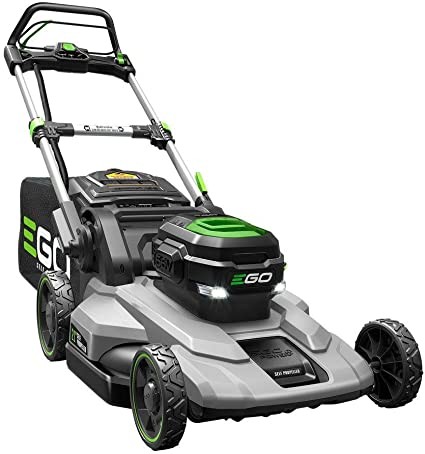 EGO
This bad boy will change your life.


I just bought a battery powered electric lawn mower and can't recommend that shit enough. I didn't qualify for Cleveland's new rebate program, in which the city's division of air quality handed out $100 reimbursements to residents who scrapped their old gas-powered mowers for new electric models, but no matter.

Only 200 rebates were available in the first place, and they were all claimed within a month. Plus I wasn't planning to buy new. (Electric mowers can be pricey.) And I didn't even have a gas-powered mower to scrap.

I'd been taming the weeds of my tree lawn and small front yard irregularly (and the more imperious weeds of my back yard even less so) with an old-school hand-powered push mower since my wife and I moved into our home in Detroit-Shoreway in 2017.

Round about 2019, distraught at my incapacity to make our modest grounds look presentable, I bought a Ryobi (50:1 fueled) weed whacker on Facebook Marketplace to handle the finesse work near the fence line and to touch up the hideous patches of yard that the push mower simply could not conquer on multiple passes.

But I am neither a natural nor an enthusiastic performer of yard work.  I have no green thumb to speak of and I don't get amped up, of a weekend sunrise, to do battle with my private jungle. I stare at our neighbors' yards, as trim and green and uniform as country club fairways, and wonder what on earth I've done. I've got nothing but weeds!  And a weedy lawn is fine — that is to say, suitably grassish — when it's short. But these chaotic species grow at such ungodly and uncoordinated speeds that within 48 hours of mowing, it looks dreadful.

To make matters worse, my wife had been badgering me about hosting some backyard get-togethers again. During the height of quarantine, we would trundle our TV outside, pitch a county fair-style tent, and invite family and friends over to watch the Browns or the Cavs around a campfire. It was Midwestern as hell. But in addition to being bad at yard work, I am also sensitive about hosting people when the yard is in disarray. I don't like to be perceived as someone who can't manage his own yard.

Also, I am what used to be called a cheapskate. I knew that I needed an immediate equipment upgrade, as the April and May rains had once again ushered my lawns to a berserk fecundity, but the thought of spending $500-$600 on a new battery-powered mower was frankly ludicrous. I liked the idea of an electric mower for much the same reasons I like the idea of an electric car — it's cleaner, quieter, better for the environment, etc. — but I just wasn't prepared to spend that much cash. Inflation be damned!

When push came to shove, I opted to buy used, having tracked down a seller on Facebook Marketplace getting rid of a model that a friend had recommended to me. It was in perfect working order and came with a battery, charger and bag for clippings. I bought it for about half the cost of its MSRP at Lowe's.  I gave it a go this weekend, and managed to mow the back, the front and the tree lawn on a single charge.

The city of Cleveland clearly understands the sticker shock that the electric mowers may induce, hence their $100 rebates to help defray costs. Given the early demand, the division of air quality should locate additional resources to expand the program and capitalize on the momentum.