For several days late last month and early this month, there were a grand total of zero UH Bikes available for rental in downtown Cleveland. Due to a sudden staffing shortage, the bike share system's operator, CycleHop, was unable to "balance" the fleet, meaning relocate bikes to dense and popular areas.

But the fleet itself has been vastly depleted. CycleHop signed a five-year contract with Cuyahoga County in 2016, under which they agreed to maintain 250 bikes in the region. But for much of the past several weeks, there have been fewer than 40 on city streets. Many of the bikes have sustained flat tires and more serious mechanical issues. On some, the electrical systems have been down.

For almost the entire week of July 29, virtually all of the UH Bikes in circulation, (~17), were parked on the banks of the Cuyahoga River, just over the Columbus Road bridge. Dockless indeed!

Area college students reportedly rent the bikes most weekends and leave them down in the Flats, after which UH Bikes staff return them to stations around town by Monday or Tuesday. But in late July, one of CycleHop's two local staffers left and the other was planning to leave. No one was around to tend to the fleet.

"The operations," Jacob Van Sickle, President of Bike Cleveland, told Scene diplomatically that week, "are a little bit in transition." 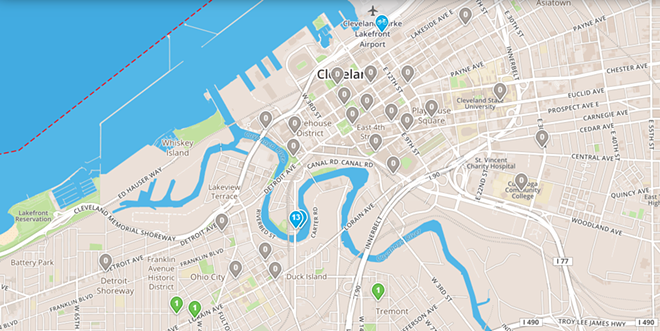 Screenshot: uhbikes.com/map
Availability of UH Bikes, 7/30/19. (Note the concentration near Rivergate Park in the Flats.)
On Friday, Aug. 2, CycleHop apologized to local partners, including Cuyahoga County, on a conference call, and assured them that they'd be hiring local replacement staff and bringing in national help in the short-term to repair damaged bikes.

The county's sustainability director, Mike Foley, told Scene that CycleHop told them the bikes' batteries run on a 2G network and are frequently drained. New batteries are reportedly being shipped in.

Foley said they were told that 60 bikes were up and running and that "we should be seeing more and more" re-joining the fleet every day. As of today (8/13), more than a week after we spoke with Foley, there are still less than 50 bikes available for rental on the UH Bikes map.

"The technology was originally provided by Social Bicycles," he wrote, "who recently decided to discontinue this older product version."

The UH Bikes shortage is coinciding with a permitting process in the City of Cleveland for e-scooter operators. The city announced yesterday that four vendors — Bird, Lime, Spin and VeoRide — had been selected for a six-month demonstration period. Scooters could be arriving in Cleveland before the end of the month.

Foley said he thinks it's possible that CycleHop may push for new bikes — in lieu of retrofitting the outdated technical system on the old ones — and that a three-year sponsorship deal with University Hospitals (hence "UH Bikes") is soon to expire, so it may be an ideal time to upgrade.

"We'll see how this ends up," he said, "The drastic changes in micromobility have been pretty interesting to watch. Cities have had to react quickly to figure all this out. Introducing scooters is not gonna be perfect."

Holzman confirmed that UH Bikes would attempt to upgrade the fleet with new bikes "by next spring," and that there were no plans to reduce fleet size on the heels of scooters' introduction.

"On the contrary, we hope to expand our fleet in Cleveland in the future," he wrote. "Bicycles can co-exist with scooters and are still very attractive to users due to the health benefits of a pedal-powered mode of transportation."