University Circle Starbucks is 4th in Cleveland, 7th in Ohio, 200th in USA to Unionize 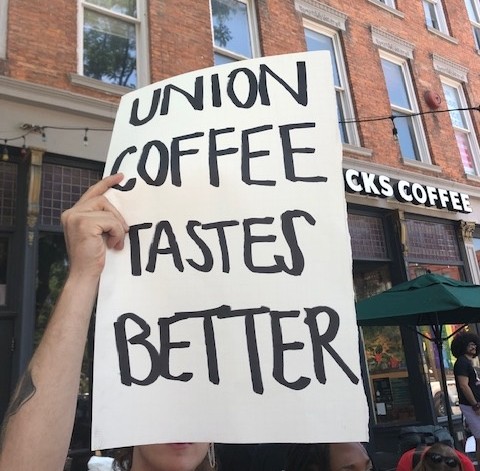 Sam Allard / Scene
Rally against union busting at W. 6th Starbucks
The University Circle Starbucks on Euclid Avenue is the fourth location of the popular coffee shop to unionize in Northeast Ohio.

The National Labor Relations Board tallied the votes late last week and announced that workers there voted 11-9 to form a union. The University Circle store follows in the footsteps of counterparts at W. 6th Street downtown, Mayfield & Lee in Cleveland Heights, and Clifton Boulevard, near the Cleveland/Lakewood border.

The location is now the seventh Starbucks store in the state of Ohio to unionize. And Starbucks Workers United, the union representing stores across the country, noted that no store that has filed for a union election in the state has lost.

But the University Circle election was more contentious than the previous three in Cleveland, where unions were voted on unanimously.  In University Circle, a string of recent terminations and threats, alongside slashed hours for employees known to be supporting the union and constant anti-union messaging from management, jeopardized the result for the union's supporters.

"They pulled out everything to try to union-bust us, and we still won," said Ken Walker, a former shift supervisor who was fired in recent weeks. "I was written up for things that I didn’t do, and they fired me 2 or 3 days after we filed charges against the company with the NLRB. This victory shows that Starbucks’ retaliation won’t work. Workers are stronger than Starbucks’ union-busting tactics."

Workers and their organized labor allies have been demonstrating at locations across town to protest union-busting. Rallies at the W. 6th location and at the University Circle location precipitated the recent NLRB votes.

The University Circle vote is also a significant milestone for Starbucks organizing efforts nationally. It is the 200th store to form a union since December, 2021, when a location in Buffalo, New York became the first to do so, launching a national wave that has not yet crested.