Wikipedia
The University of Akron hasn't had the best week. First, more details on the university's failed bid to partner with for-profit ITT Tech, came down through public records analysis by the Akron Beacon Journal (the partnership had long been rumored, then vaguely discussed publicly, then criticized). Then Stark State College, a Jackson Township-based school that offers two-year degrees and certification programs, announced it would be building a campus in Akron.

The press conference drew leaders from the city and region. Not among them was University of Akron president Scott Scarborough. He did talk to the ABJ about Stark State's announcement though and had this to say.


But UA President Scott Scarborough, during a recent interview with the Beacon Journal, said he doesn't see a lot of overlap between UA's programs and Stark State's. UA runs the two-year College of Applied Science & Technology, formerly known as Summit College.

"We see it as Burger King located next to McDonald's or a nice restaurant district forming where one kind of feeds on the other... We feel it may be complementary," he said.

Oh, where to begin?

Perhaps by not comparing your university to a fast food restaurant. (Also, it's unclear in his description whether Akron is McDonald's or Burger King, but that's neither here nor there.)

Also, those are two direct competitors! There's no complementary relationship between McDonald's and BK. No one's glad they exist close together so then can get a filet of fish and then hop across the street to grab an Angriest Whopper or something else that'll turn your poop different shades of the rainbow.

And do you mean feed off one another? Feeding on one another seems like cannibalism and competition.

Anyway, speaking of UA's two-year College of Applied Science and Technology, Todd Rickel, the vice provost and executive dean of the school, blasted out an email on May 9 throwing shade at Stark State and trying to remind anyone who would listen that he has little to no regard for their operation and probably doesn't agree with the McDonald's + Burger King symbiotic relationship analysis. Via the Devil Strip. (If the image below isn't clear, the link takes you to a clearer version.) 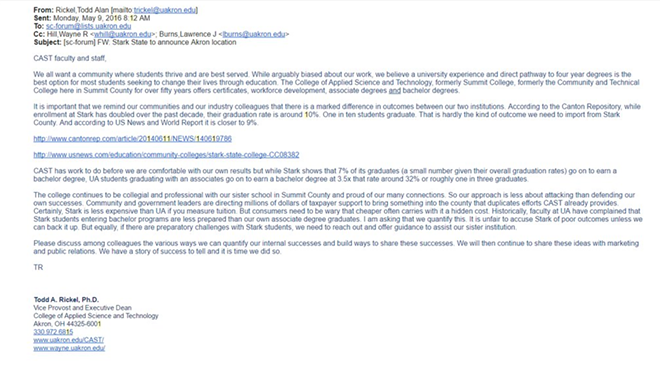 But yeah, in general, maybe don't compare your four-year university to a place that sells food for $1.