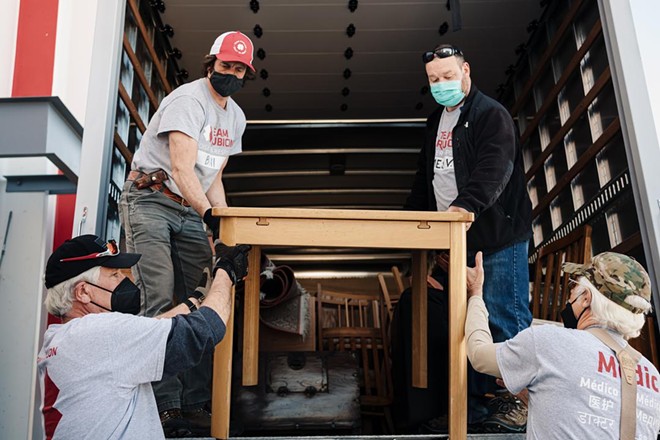 During the second half of 2021 and first few months of 2022, Cleveland became home to nearly 700 resettled refugees from Afghanistan.  The United States pulled out of the Central Asian country after nearly 20 years of sustained conflict, and Afghans who had worked with the U.S. military or were otherwise affiliated with U.S. companies faced violent reprisals from the Taliban and were forced to flee.

In Cleveland, local resettlement agencies have been working to secure housing and employment for the new arrivals. They have received support from committed local volunteers contributing time and financial resources.

Scene spoke with the local field office of the United States Committee on Refugees and Immigrants (USCRI) for a story in February, which surveyed the resettlement landscape and a number of volunteer efforts. It was clear from our reporting that among other things, volunteers provided a key service: dealing with everyday obstacles to free up the agencies for more complicated issues, especially those related to housing and jobs.

One key but necessary obstacle faced by resettled refugees is furnishing their new homes. In Cleveland, a national disaster relief nonprofit that began after the Haiti earthquake in 2010 took up the mantle.  The organization, which was founded by U.S. military veterans, is called Team Rubicon. It pivoted from natural disaster relief during the pandemic to begin helping communities with their Covid responses. And when the resettlement wave hit, it pivoted again.

Lea Ruscio is Team Rubicon's Cleveland Task Force leader.  She has overseen efforts to help newly arrived families set up their homes. Working with the resettlement agency US Together — one of three operating in Cleveland — Team Rubicon has provided more than 350 hours of volunteer work.

"We have a bias for action," Ruscio told Scene in a recent interview. "When there's something going on and we can make a difference, our volunteers get in there physically."

Ruscio said that nearly 30 volunteers have been meeting multiple days per week to collect donated items, manage inventory, and move families into their new homes. (Starting this week, volunteers will begin meeting once weekly, as the new arrivals and their needs have finally diminished somewhat.)

"By us knocking out the physical labor, that frees up the case workers to focus on things like medical care, language training and job applications," she said. "They're not worried about, 'did that chair make it there?""

Lee Columber II, a Community Engagement Manager with US Together, confirmed the importance of Team Rubicon's work.

"Their support included streamlining in-kind donation management, acquiring box trucks and storage space to carry out entire home arrival set ups. They organized volunteers to move and set up items in homes ranging from shampoo and tooth brushes to couches and desks for children to use," Columber wrote Scene in an email. "By living the motto 'it takes a village,' they were not only able to help Afghan families settle into new homes, but created greater capacity and more efficiency in our ability to support refugee families."

Team Rubicon's Northeast Ohio outfit spans five counties, with more than 700 total volunteers having contributed over the years. Ruscio said in recent outings, interacting with the newly resettled families has been the volunteers' "favorite part of the day."

"I can't imagine being in their shoes," Ruscio said. "To go somewhere that's such a completely different culture. But when you see these kids, who are so excited for a desk or a bicycle, it's the most amazing thing. When kids can have fun, riding bikes and just being kids, something's right in the world."