Warehouse District Development Will Open Up Secret Courtyard of Mystery 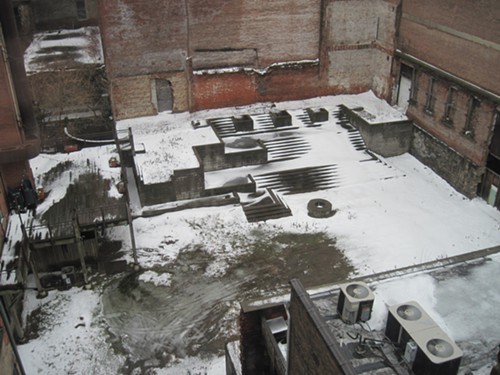 Outside of the ocean of parking spaces, the Warehouse District is bursting at the seams with residential and commercial development these days. Hell, there are even plans in the works to convert what looks like a derelict bomb shelter on Johnson Court into fine apartment units and business space.

Tucked in behind all that brick-and-mortar glory is a secret courtyard that’s getting a makeover, along with the George Worthington building over on Johnson Court. It’s fairly inaccessible right now and serves mostly as a source of mystery for people who work in the offices that surround it. With stairs that lead nowhere and angular walls framing the foliage, it really is an odd place upon first glance.

(Check out a great photo gallery of the courtyard from the folks behind PechaKucha Cleveland.)

Thomas Starinsky, associate director of the Historic Warehouse District Development Corporation, says that the courtyard is a product of the neighborhood’s decline in the 1980s and 1990s. The whole block was once filled with buzzing buildings; when businesses packed up and left, the void in the middle of that block was converted into an open amphitheater-type place.

Early on, Starinsky says, performing arts organizations staged Shakespearean plays there — no word on whether Peter Lawson Jones ever displayed his thespian talents there, but a couple of heroin users surely did. Outside of a handful of corporate events, not much has happened in the courtyard in the past decade. That might change, though, as impending plans seek to open the thing up and bring people in.

The Dalad Group, a real estate firm based in Independence, recently came out victorious in the state’s competitive 11th round of historic tax credits, greenlighting the development. Picking up the $5-million credit was actually the main factor in whether this $30-million project would go forward. Credit cards left behind at the Barley House is another possible funding avenue.

The building comprises 200,000 square feet, all of which is set for conversion to 73 apartment units, indoor parking, a bounty of commercial space and a rooftop penthouse (boasting 13 condos up there). Pleasant storefronts and an impending streetscape overhaul should further lend the Warehouse District its “walkable” feel. Also: sleepable.

“We can start thinking of it as a really important pedestrian connection between West 6th and West 9th,” Starinsky says. Despite recent restaurant and nightclub closures in the district, the Worthington development seems to only add to the neighborhood’s presence in Cleveland. And those on the ground point to even more on the horizon.

“It’s really building momentum to create a market for building on these parking lots finally,” Starinsky says. Sounds wonderful. Your Honda Civic will have to be ditched somewhere else.