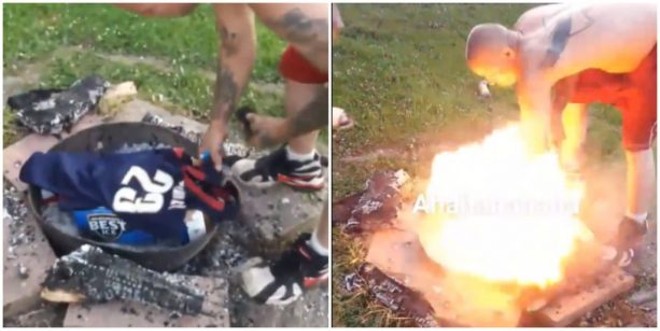 YouTube
We've got a special installment of "People Doing Dumb Shit on the Fourth of July," with a disgruntled Cavaliers fan who accidentally set himself on fire trying to burn his LeBron James jersey.

Despite James keeping his promise to bring Cleveland their first NBA Championship, and despite most Cavs fans expressing gratitude for his time back in The Land, some fans are still bitter as hell that he's leaving for the Los Angeles Lakers.

In fact, one unidentified fan was so bitter (and potentially inebriated), he decided to bring back the 2010 tradition of burning their King James jerseys. The only problem is that this dude clearly pours a flammable liquid onto the jersey, an empty box of the classiest Milwaukee's Best and himself before igniting a fireball.

The jersey is his property, so he's free to do with it what he likes, but we doubt burning the first layer of his skin off was part of the plan.

If you feel so compelled to set your jersey on fire, may we suggest safer alternatives like donating them to children, framing them for a keepsake, turning them into a quilt so you have something to cry into next season or using them to fill the untouched potholes in your neighborhood to smooth your commute.

Check out the video of this genius below: