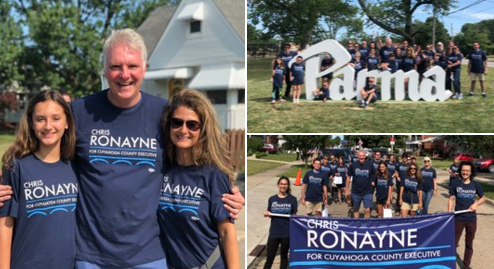 Ronayne walked away with better than 90% of the vote from the party's executive committee, about 450 members of which attended the meeting via Zoom. It had originally been scheduled as an in-person event, but was modified to a virtual format in light of the Omicron variant. The fact that the party is endorsing in an open primary race at all, and that they did so before the filing deadline, will remain matters of consternation for those attempting to reform the party into a legitimate organization.

Ronayne's endorsement was never in doubt after the disintegration of competing candidacies engineered by Bill Mason, Dave Wondolowski and the doddering gnomes of Parma. That crew, who represent the party's withering old guard, managed to entice Maple Heights Mayor Annette Blackwell to run for the seat, but shoved her aside when they decided that Warrensville Heights Mayor Brad Sellers would be a more formidable candidate.

Woopsie! Sellers' campaign sunk before it got a chance to unfurl its sails, due to reporting by Kaitlin Durbin in cleveland.com and The Plain Dealer documenting his enduring preference for not paying taxes.

With no time to muster anyone else, the Mason wing surrendered to the inevitable and Ronayne coasted to victory. Four percent of executive committee voters backed former state legislator Shirley Smith, and about 3% abstained. Another perennial candidate, Tariq Shabazz, announced his candidacy the day before the meeting and did not manage to whip up enough votes to earn a percentage point in the intervening hours.

The enduring question for some is why on earth Mason and co. had it in for Ronayne. Though no one could say for sure when Scene poked around, the obvious answer is that the party's old guard prefers to install leaders who are indebted to them for the installation—puppets, in other words. Ronayne didn't necessarily do anything antagonistic, but he also wasn't under Mason's thumb. That made him an enemy.

According to reporting from Richard Andrews in the Real Deal Press, one of the Mason crew's chief strategists was, hilariously, Galen Scheurlein, a local attorney and political consultant. That's hilarious because Scheurlein is Ronayne's literal neighbor. She reportedly still harbors extreme bitterness towards Ronayne due to the infamous Lake Ave. street widening dispute of 2021, in which Ronayne was on the correct side, advocating for the Metroparks' sidewalk enlargement to improve access to Edgewater Park for pedestrians and cyclists.

Scheurlein, (along with former Planning Commission Chair David Bowen, incidentally), was on the opposite side, advancing so many full-throated illogical arguments about home values, traffic and the tree canopy—the fully funded, newly paved, slightly larger sidewalk, which was to be maintained by the Cleveland Metroparks, would "increase carbon dioxide and urban heat" on Lake Avenue, the opponents screeched—that they prevailed.

Not content with this victory, perhaps, Scheurlein dove headlong into the Mason-Wondo axis of idiocy. "She may have been instrumental in recruiting Sellers to replace Blackwell," Andrews reported.

Ronayne, who will undoubtedly win the Democratic primary in May, will face Republican Lee Weingart in the general election.