West Side Councilman Literally Out Here Putting Steering Wheel Locks on Basketball Hoops Because of 'Basketball, Gambling and Guns' 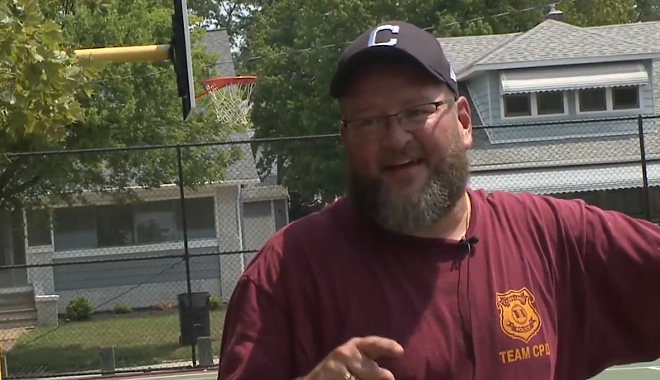 Ward 16 city councilman Brian Kazy has literally put steering wheel locks on the basketball hoops at Jefferson Park (Lorain Avenue and W. 133rd), so distraught is he over the tripartite scourge of basketball, gambling and guns.

"I have a problem with people playing basketball, gambling and carrying guns," Kazy told Ed Gallek from the Fox 8 I-Team.

He said he didn't want the hoops to be closed down permanently, but he considered the steering wheel locks a temporary fix until the "root of the problem" could be determined.

The problem, as Kazy outlined it, is that crowds of people sometimes gather at the courts. They sometimes gamble. They sometimes smoke weed. On Monday night, the problem exploded: A shooting took the life of one man and injured two others. It followed a violent weekend in Cleveland, the latest in a grim 2021 series, during which there were at least nine incidents of gun violence.

The Jefferson Park incident occurred near the basketball courts, but there's no indication that basketball itself, or gambling for that matter, was to blame. From the cleveland.com report:

"Witnesses told investigators that two unknown men arrived at the park in a vehicle, approached the victims on foot and started shooting. The two men got back in the vehicle and left the neighborhood, police said."

In that case, Kazy might be better off banning vehicles than banning basketball, but his response follows a pattern. It's identical, in fact, to the city of Lakewood's, which took down basketball hoops at Madison Park after a shooting there in April. The hoops were put back up two weeks later after resident outcry.

"Basketball courts do not cause gun violence," wrote a resident in a letter to the editor in The Plain Dealer. "Guns cause gun violence. The city’s response to close only these courts sends a very clear message: Keep “others” out, so long as we are protected."

That message has been sent in communities across the country, where basketball courts and hoops tend to be removed as neighborhoods become whiter and wealthier. A recent report on the topic found that in Chicago, over the last decade, 16 basketball courts and 42 backboards have been removed from city parks, and that the neighborhoods where they have come down have also experienced the highest increases in property values since 2000.

Kazy's actions might have made more sense as political theater, a stunt to endear himself to Ward 16 voters in an election year. But Kazy is running unopposed in 2021. His actions are merely the default response, which emerges from the assumption that Black people hanging out in groups is by definition a problem.