What Does Ohio’s New COVID Curfew Accomplish? Not Much, Experts Say 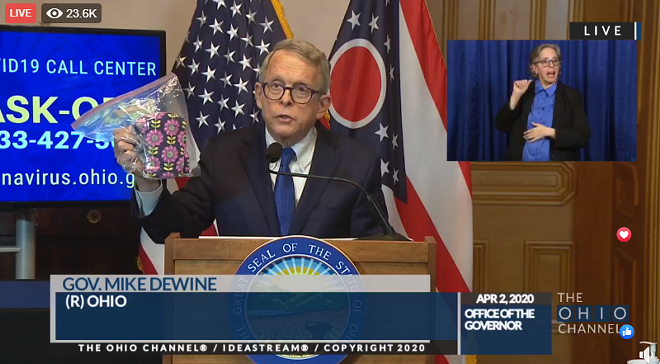 As of Nov. 19, Ohioans will be breaking the law if they’re out past 10 p.m. — unless they’re shopping for groceries, going to work, or meet other exemptions.

The porous curfew, which Gov. Mike DeWine described Tuesday as an attempt to slow the spread of COVID-19, came after he walked back a plan that he announced last week calling for the closure of bars and restaurants.

Adding to the confusion, the text of the order was not publicly available as of Wednesday evening. This report is based on DeWine’s description of the order at a press conference.

The policy change comes amid record high new caseloads and active hospitalization counts in a pandemic that has killed more than 5,800 Ohioans since March.

Several public health experts said in interviews they’re skeptical the curfew will have any effect on the pandemic.

“I see it as just another ineffective policy that prevents something more effective being put in place, and puts us in a really bad spot three weeks from now,” said Tara Smith, an epidemiologist and infectious disease researcher at Kent State University.

She said the order is confusing. It’s a curfew full of caveats and carve outs, and DeWine said it largely wouldn’t be enforced.

When it comes to enforcement, she questioned whether preexisting problems will manifest themselves of police officers disproportionately targeting people of color. And if the order is porous and milquetoast, why bother?

They may reinforce a message that less social interaction is better than more but aren’t much of a policy solution.

“I’m not convinced that curfews are doing much,” he said.

On Nov. 11, DeWine said if the trend of surging cases and hospitalizations continues, we will be “forced” to close bars, restaurants, and gyms, and that he would revisit the issue in seven days.

“These are places, candidly, where it’s difficult or impossible to maintain mask wearing, which we know now is the chief way of slowing the virus,” he said at the time.

In an about face Tuesday, DeWine, joined by Ohio Restaurant Association head John Barker, walked back the closures and announced the curfew. An ORA newsletter issued Tuesday evening bragged the association “negotiated” with DeWine and Lt. Gov. Jon Husted “to achieve this outcome.”

“This to me does seem like a compromise, and a compromise to the point where it’s unlikely to be effective at a county or state level,” said Mark Cameron, a professor at the Case Western Reserve University School of Medicine.

Cameron said the curfew makes sense under the theory that fewer person-to-person interactions leads to fewer cases. Every time people interact with other people, it’s a “roll of the die.” The curfew, he said, cuts down on how many times the die is cast.

“We’re running out of approaches here that don’t involve the economy shutting down,” he said.

Dr. Bill Miller, an infectious disease researcher at Ohio State University, offered a comparatively warmer take on the curfew, describing it as a messaging effort more than a policy change.

It tells people that something needs to change, and it’s based on the general idea that people who are drinking are making poorer decisions.

“The curfew may limit some of those,” he said in an email. “But the biggest impact it could have, really, is if people see the curfew as a message that things are bad and then they start to limit interactions.”

He said there’s no one policy solution to the pandemic — it will take a societal change in approach. He said he doubts the curfew will contribute to any pandemic fatigue.

“Burnout related to the pandemic is real, but it’s the pandemic that’s the problem, not the orders,” he said.