When Johnny Goes Off to War

Patriotism may be surging, but military enlistment isn't. 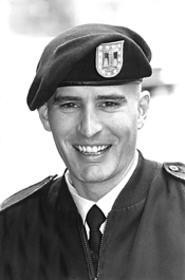 Walter Novak
Army Captain Timothy Leroux hopes enlistment will increase in Cleveland this year.
It was a burst of national pride that felt both retro and admirable. After the September terrorist attacks, flags were suddenly everywhere: waving from front porches, poking out of planters, blazing on the back pocket of the bartender's jeans. The age of irony, one magazine proclaimed, was over. Cynicism, out. Patriotism, in.

So it might be expected that, as in December 1941, brave kids would rush off to serve their country. After all, the Vietnam-era credo of doubting one's leaders had become passé. The country was attacked, the nation was united, and it was up to the military to save the day.

The idea sounds logical, but it's wrong. Although enlistment has risen steadily in Cleveland over the last decade, the events of September 11 had a negligible effect at best, says Captain Timothy Leroux, Cleveland's lean, earnest Army recruiting company commander. Recruiters in Greater Cleveland signed up exactly eight more people in the months following the attacks than in the same period the year before -- and that number includes all four branches of the military.

There were some tentative movements toward enlistment, Leroux says. Recruiting stations in white-bread outposts like Parma and Mentor showed slight increases. And across the board, "We did have a lot of thirtysomethings who called in or stopped in and said, 'I want to do something,'" he says.

And yet? "In most cases, they didn't join," Leroux says. Some were automatically disqualified, since the military caps the age of new recruits at 34. And the others, well . . . Leroux pauses. He says he is unwilling to make generalizations, because each person has a different reason. Then he smiles sheepishly. "We certainly did have some people sign up and ship out post-September 11. We did have some."

Julia Bobick, a spokeswoman for the Army Recruiting Command, says the trend in Cleveland held true nationally: Interest in the military increased, with more web hits and phone calls, but no spike in enlistment. The same thing happened at the beginning of the Gulf War, she says, with similar results.

For career officers like Leroux, the lack of enthusiasm is almost embarrassing. After all, the nation was attacked. Yet even he concedes that new enlistees don't exactly get a chance to kick some al-Qaida butt. "The men and women that are doing most of the work in Afghanistan are highly trained professionals," he says. "They've had years of training. And that's why we're so good."

As recently as Vietnam, "shake and bake" officers were common. The Army would enlist a bright young man, train him for three months, promote him to officer, and send him to war. The Army today is too technical for that, Leroux says. The equipment is sophisticated, and it takes time to learn how to use it. Kids tell him they want to be Green Berets, but Leroux has to remind them they start at the bottom. "A lot of people are into instant gratification," he says, sighing.

And even during the "war on terror," the Army guarantees new recruits the station of their choice. Just because they enlist doesn't mean they fight, as Cleveland native Nick Boriska learned in October.

Boriska thought about enlisting before September 11. He had a long-term goal of being a policeman, but at 19 was too young to apply. So he spent a semester at the University of Toledo and one at Lorain County Community College; he got a job refinishing floors and tried to decide his next move. Paul Boriska, Nick's father, says his son needed direction. "He wanted discipline," says the former Marine.

After September 11, Boriska's mind was made up. Within a month, he and two longtime friends, Frank Williams and Barry Bentley, had joined the Army's infantry program.

Their mothers, of course, were anxious. Enlisting in peacetime would have been one thing; signing up as bombs burst on CNN was another. "At first, I was really upset," says Lynda Boriska, grimacing. "I was like 'That's my son!' Then my next thought was 'He's going to Afghanistan!'"

Well, not exactly. Boriska and his friends will likely spend their entire three-year tour in their chosen destination, Hawaii. Even in wartime, the Army is more about waiting than warring.

The three young men learned that lesson almost immediately. They shipped out to Fort Benning, Georgia, in November, and the waiting began. New recruits typically spend their first week in the reception station, getting their hair cut, receiving uniforms, and taking fitness tests, says Elsie Jackson of Fort Benning's public affairs office; then they start training.

But the three friends idled in the station for four weeks, with little to do but wait. There was limited television, and only on Sunday. Bedtime was at 9 p.m., but after doing nothing all day, the recruits weren't tired. "They were doing push-ups and sit-ups all day, because they had nothing else to do," Lynda Boriska says.

The month was exasperating. Mail didn't always get through. Paychecks didn't come as quickly as expected. There weren't enough pillows to go around. Williams called home so often that Ameritech, fearing a scam, started blocking collect calls to his parents' number. Boriska mailed letters detailing his boredom. "So far this kinda sucks," he wrote in one. "Just because we are doing nothing."

Jackson says Fort Benning had either an unexpected influx of recruits or so few that it had to wait for more to enlist to form a company. "That is a little long to stay there," she concedes. When basic training finally started in December, Boriska's letters suddenly lightened up. Williams told his mother he was again excited.

Although the friends' tour is off to a slow start, Leroux says they shouldn't count on it staying that way. The Army dropped from nearly 800,000 soldiers in 1992 to 480,000 today, part of a Clinton-era downsizing. "The soldiers that are left have been extremely busy," he says.

And so the good news might be this: Despite that fact, and contrary to hand-wringing about the selfish cowardice of today's youth, enlistment didn't drop following September 11. Recruiters like Sergeant James Mauer of the Lakewood center says he doesn't see many prospective soldiers who beg to get into combat, but not many ask to avoid it, either. Recruits often ask about the odds that a particular job will see action, yet they don't seem to be avoiding the ones that will. "We're hearing a lot more kids say, 'What can I do for the Army?' instead of 'What can the Army do for me?'" Mauer reports.

Even as the area's number of enlistees rose throughout the '90s, the Army believes this year will top the last. As Leroux tells it, that's one part optimism, one part confidence in recruiting efforts, and one part faith that the wave of altruism popularizing police and fire work will make the Army hot, too. Realistic or not, the Army hopes that kids like Boriska are simply one step ahead of a military trend.