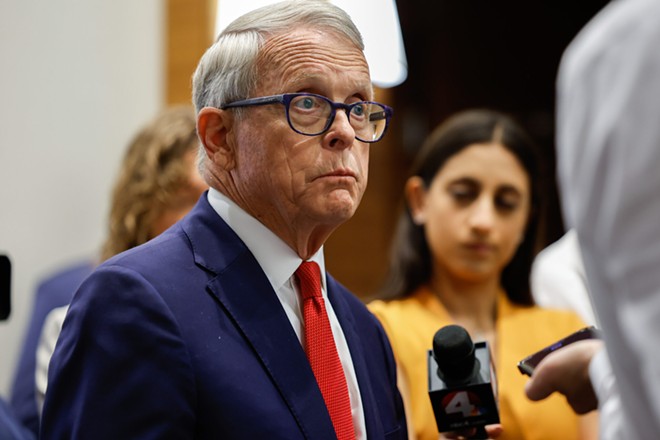 
In a little-noticed measure, whether a person is a “noncitizen” will now be printed on driver’s licenses and state IDs under a controversial law that was just signed by Ohio Gov. Mike DeWine.

Critics worry that the requirement addresses a nonexistent problem while making it more difficult for documented immigrants to get IDs they need to function — and possibly driving some deeper into the shadows.

Immigrant advocates also worry that the legislation might subject immigrants to potential harassment and maybe even violence.

House Bill 458 is already being slammed for numerous provisions that its critics see as making it more difficult to vote — particularly in urban areas and communities of color that tend to support Democrats.

Among the requirements of the bill passed by the state’s heavily gerrymandered GOP legislature is one limiting counties to only one ballot drop box. That’s regardless of whether a county has 13,000 residents or 1.3 million.

Voters in Franklin County — the state’s largest — went against former President Donald Trump by a 2-1 margin in 2020. And because it had only one drop box, early voters had to make their way to the Board of Elections office on busy Morse Road and wait in lines that could take 90 minutes and longer before they could vote.

And, even though possible voter fraud in the 2020 election was a microscopic 0.0005%, the new law purports to fight the supposed problem with a strict new voter ID requirement. Voting-rights advocates fear those provisions will effectively disqualify many poor voters of color — especially those who are wildly overrepresented among the 1 million Ohians whose licenses are suspended for debt-related reasons.

A lawsuit has been filed to stop some of the law’s more controversial provisions. But another aspect of it has gone virtually unnoticed — a requirement that driver’s licenses and state ID cards have notations disclosing when their owner is a “noncitizen.”

Corrylee Drozda works with immigrants for the Legal Aid Society of Cleveland. She said that the legislation requiring IDs to flag noncitizens was part of a separate bill. When that failed, it was slipped into HB 458, she said.

“Our biggest concerns about the noncitizen notation are that it will disincentivize noncitizens from getting a state ID and could make the process even more challenging for noncitizens at the Bureau of Motor Vehicles," she said in an email. “Our clients often tell us that the BMV wrongly turned them away because the BMV was not familiar with the type of document showing their eligible immigration status.”

However, DeWine Press Secretary Dan Tierney said that the requirement can in some cases protect immigrants from unwittingly casting illegal ballots. In an email, he said that “while voter fraud cases are indeed rare, the overwhelming majority of such cases involve non-citizen voting. These cases share a pattern where the non-citizen was often solicited to register to vote, sometimes even at a (BMV office) through the motor-voter program; circumstances would then cascade when the application proceeds without catching that the applicant was a non-citizen, and the individual would eventually be sent a notice of their neighborhood polling place and be encouraged to cast a vote, leading some to do so and eventually being identified as an illegal non-citizen voter.”

Tierney added that it wasn’t Dewine’s idea to write the idea into the law, but it could have merits.

“While the language was not proposed by our office, the scenario described above is real and has happened with frequency, and it is not unreasonable to see how the provision might have been drafted to reduce such instances,” he said.

But others it’s dangerous to call out people as noncitizens on official IDs that they frequently have to produce — including to law enforcement.

“There are a lot of people in Ohio who think that there’s an invasion at the southern border and they might try to do something about it,” said Collin Marozzi, deputy policy director of the American Civil Liberties Union of Ohio.

Despite the hype, immigrants are less likely than the native-born to commit crimes, and they’re more likely to be the victims of hate.

“Overall, being an immigrant or non-citizen, was associated with an increase in odds of being the victim of a hate crime,” criminologists Wesley S. McCann and Francis Boateng wrote as part of their 2020 study, “An Analysis of Hate Crime Victimization Amongst Immigrants.”

Just last week, a 56-year-old woman allegedly stabbed an 18-year-old Asian woman repeatedly in the head on a Bloomington, Ind., bus. The alleged attacker told police that she did it because she thought the 18-year-old was Chinese and killing her would leave “one less person to blow up our country,” the Washington Post reported.

The Southern Poverty Law Center said such xenophobic hate has been on the rise in recent decades.

“Anti-immigrant hate groups are the most extreme of the hundreds of nativist and vigilante groups that have proliferated since the late 1990s, when anti-immigrant xenophobia began to rise to levels not seen in the U.S. since the 1920s,” the group wrote.

The report said that after Trump lost the presidency in 2020, anti-immigrant groups have been working with friendly law enforcement and government officials to try to lock in anti-immigrant policies advanced by the former president.

“By employing a strategy focused on building relationships with and mobilizing state and local actors within and outside government, the anti-immigrant movement continues to tout bigoted policies and messages while working to stall any relief for immigrants and their loved ones,” the report said.

Drozda of the Legal Aid Society said calling out noncitizens on government IDs will intimidate immigrants and may have the perverse effect of putting more unlicensed drivers on the road.

“The noncitizen notation is both unnecessary and harmful,” she said. “Our noncitizen clients already must overcome many barriers to secure a driver’s license or state ID card. Due to language, cultural differences, unfamiliarity with the U.S. legal system, and fear of immigration enforcement, many noncitizen Ohioans are hesitant to share their information with government offices and report criminal activity in their communities. Adding a noncitizen notation on driver’s licenses and state ID cards will only exacerbate these problems.”