It ain't the state, which is shacking up with bankers. 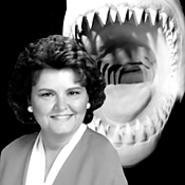 Betty Montgomery knows for whom she pimps.
If, for reasons that involve narcotics or severe head trauma, you still believe state government is working for you, visit the courtroom of Judge Peggy Foley Jones on July 17. There you will witness a case between the City of Cleveland, which needs no introduction, and the American Financial Services Association, a group composed of people who used to be called loan sharks until they traded their baseball bats for tasseled loafers. Now they're called "subprime lenders."

You will also find lawyers from the office of Attorney General Betty Montgomery. Though you will be picking up their tab, they'll be working for the loan sharks.

Technically, the case is about home rule, Cleveland's right to protect its citizens. In reality, it's Montgomery's chance to prove once and for all whose back the state's got covered. Hint: It ain't yours.

The background: Earlier this year, a collection of rednecks and lapdogs known as the General Assembly passed a law on predatory lending, the art of suckering people into high-interest mortgages with fees so loaded and terms so poor, your wallet needs a tourniquet. Since these loans so often end in foreclosure, with the bank repossessing and then neglecting the home, cities naturally want to do something about them.

Yet the legislature's bill didn't actually outlaw these practices. No, it simply barred cities from outlawing them. Diane Citrino, a lawyer with Housing Advocates Inc., calls it "The Predator Protection Bill. It's a free pass to fraud."

Officially, the state's logic goes like this: Since many cities were beginning to crack down on loan sharks, it didn't want patchwork laws that varied from town to town. Which would sound reasonable -- if it didn't come from the Ari Fleischer School of Baldfaced Lying. Truth be told, cities were forced to act because the state wouldn't. The legislature's bill merely vows to study the matter further, which is governmentese for "We'll get to this when squirrels operate Buick dealerships."

Yet the fine men and women of the Cleveland City Council smelled a rat. They had spent a year working on a real bill -- one that includes criminal penalties. So they passed it anyway.

Governor Bob Taft, being a moron of impressive range, quickly praised Cleveland's move, "apparently not realizing he had just signed this bill saying municipalities can't regulate this," says Citrino. "It was bizarre."

But Montgomery knows for whom she pimps. And when the American Financial Services Association sued the city, contending Cleveland's statute violates state law, the attorney general made bed with the loan sharks.

Bankers and their assorted lapdogs -- see Republicans -- argue there's nothing wrong with subprime lending. It simply helps financially struggling families to enter the wonderful world of home ownership. Naturally, those who pose a higher credit risk should pay higher rates and fees.

This, however, is the sunny side of the racket. The other side can be found in the files of Housing Advocates Inc.

Consider the elderly woman who needed home repairs, so she took out a second mortgage. "This person was blind and signed documents she couldn't see," says the agency's Lucy Dukes. They just so happened to include abnormally high fees that couldn't be repaid, but they weren't discovered until the woman died. Her niece is now fending off foreclosure.

Consider the sickly old woman who needed a new roof. The lender talked her into refinancing her house instead. But under the terms, she had only $200 left on which to live each month -- and there was a $40,000 balloon payment at the end. "When you see things like this," says Housing Advocates' Tony Stevenson, "one of two things is happening: She either has to refinance down the road and pay more fees and closing costs, or they're getting her to default."

The woman got sick, was hospitalized for a few months, and the bank foreclosed.

Mind you, this racket isn't being played by a few unscrupulous small fries. It's being played by the biggest banks in the state. Charter One was recently embarrassed into closing its subprime affiliate after data revealed it was targeting blacks with high-interest loans, and protestors began appearing outside its offices. According to court documents, even customers with near-perfect credit were getting rates as high as 12.7 percent.

So why doesn't the state want to enact basic protections? Because our top leaders are so in bed with the banks, they want to have their babies.

Prime exhibit: state Treasurer Joe Deters, Ohio's top money guy. For months, Deters lied about funneling $250,000 in donations from bankers and brokers through the Hamilton County Republican Party, thus skirting election laws. Only after The Plain Dealer caught the party kicking the loot back to Deters's campaign did the treasurer finally confess.

Then the feds jacked Fifth Third Securities with a record $1 million fine. Two bank executives had made $15,750 in contributions to officials who oversee municipal bonds. Over the next two years, Fifth Third scored $2.3 billion in business from the state, according to the Securities and Exchange Commission. Deters is said to be at the heart of the investigation.

Give state officials an F for being stupid enough to always get caught. But give them an A for educational outreach. Every week, they provide yet another teachable moment on why you shouldn't trust them. They may be scumbags, but no one can say they didn't warn us.