Some of it has to do flushing paper towels 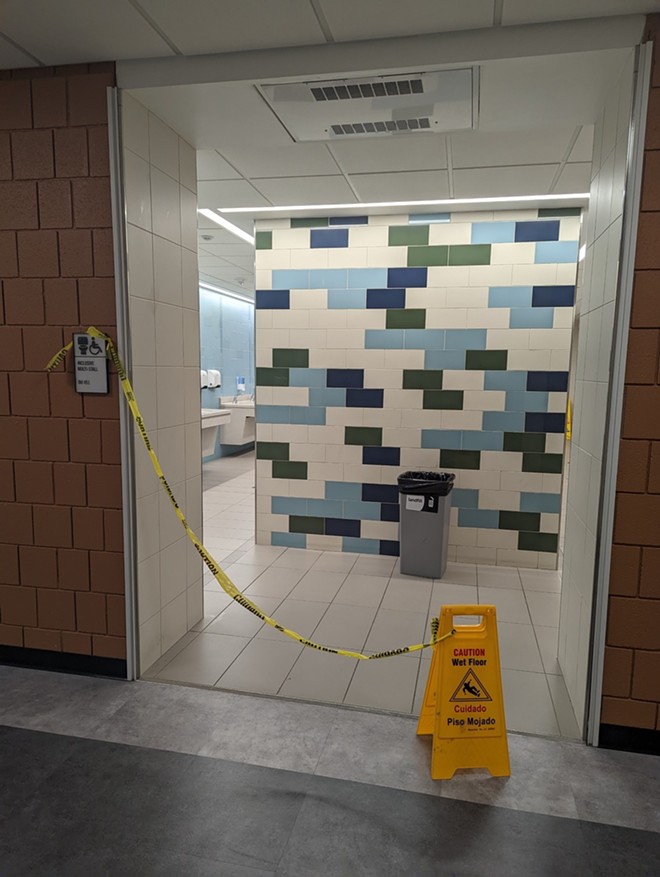 During the fall semester of 2021, Cleveland State’s first multi-stall gender-inclusive bathroom was introduced on campus, located on the 4th floor in Berkman Hall. The bathroom features 14 stalls with doors that reach the floor, creating privacy.

Cleveland State students identifying as transgender and non-binary were excited and relieved when this gender-inclusive bathroom first opened.

Cleveland State student Issac Montgomery shared at the time, “Personally, for me, it eliminates that stigma of like ‘now people are judging me,’ like ‘oh my gosh, they think it’s a woman in the bathroom’ when really you’re just trying to pee.”

“I was really happy that (the bathroom) was there, and I remember going in the first time thinking dang this is nice,” Lee Barden (they/he), a trans-masculine student at CSU stated. “I don't have to worry about everyone giving me weird looks or anything, it’s just so stress free.”

But only having one multi-stall gender-neutral bathroom on campus can cause problems. The biggest and most recent issue is it being closed for the first month of the fall 2022 semester due to plumbing issues because students were flushing paper towels down the toilets.

One transgender student at CSU, who wished to remain anonymous, said, “(The bathroom) being closed for the first month of school made it very difficult, it was demeaning, it hurt me and I had to plan around it”

The student noted that three of their four in-person classes are on the fourth floor of Berkman Hall, and they’d have to run all the way to the first-floor Student Center to use the bathroom.

“I use a cane. Extended periods of walking are very difficult for me, I try to avoid going to other buildings unless I have to, it’s painful and difficult and I'm slow’, The student stated. “I’d fight between my physical and mental health. Do I use the women’s bathroom because it’s closest or go to another one and risk pain?”

The incident of paper towels being flushed down the toilet also happened in several gendered bathrooms. Still, with various gendered bathrooms throughout the school, students who identify as cisgender could find another bathroom easily. Trangender and non-binary students are left with little to no options when the gender-inclusive bathroom shuts down for any reason.

Barden shared that within the LGBTQ+ student-led Discord, he kept seeing messages about the bathroom being closed, and nobody knew at the time why this was.

“I heard it's been closed so often that I don't even want to bother going down there,” Barden said.

Barden shared that instead, they would use the single-gender stall bathroom or they would “suck it up and use the women’s restroom,” even though this would make them uncomfortable.

Barden also stated that they had days on campus that they skipped using the bathroom because he does not pass either way on campus.

Single-stall restrooms, of which there are many on CSU's campus, are often the main or only option for transgender folks. They are also the first choice for companies to install gender-inclusive restrooms.

Cuyahoga Community College, for instance, offers various gender-inclusive bathrooms on every floor in every building of the school. All of these bathrooms, though, are single-stall restrooms.

However, “single-stall family restrooms can reinforce the ‘othering’ of trans* folks when it’s the only safe option available for them,” previous Cleveland State LGBTQ+ Student Services coordinator, Kara Tellish, shared in a statement.

Cleveland State Associate Vice President David Kielmeyer shared that if paper towels being flushed down the toilets continues to be an issue, the school will switch to air dryers.

In response to a question about future plans, a university spokesperson said, "The university is currently developing a 10-year master plan to guide the development of facilities on our campus. Cleveland State University’s commitment to diversity, equity and inclusion and providing a safe, welcoming environment for all is one of the guiding principles of that plan. We have and will continue to add gender neutral restrooms on campus as opportunities present themselves and funds are available."