He may be a psycho. But he's a stand-up psycho. 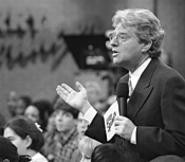 Tom Dingow offers a polite yet patronizing look when asked his political affiliation. "Being a West Side Irish-Polack and a union member? C'mon, that's a silly question," he says, sizing up the moron who asked it. "I'm a Democrat."

He's leaning over the bar at the Far More Café on Lorain, the kind of place where you can strike up a conversation within five minutes, and be buying each other shots within 10. It's a small, skinny joint, lined with beefy men who just escaped the 7-3 shift, or didn't work at all. Dingow, a pipe fitter by trade, is among the latter. "Work sucks," he mumbles. "There ain't no work."

On the TV, an obese woman, who looks to be the product of an illicit union between an offensive tackle and a large aquatic species, pulls down her pants to moon the studio audience. Someone mentions that today's show is about a mother who confronts her hooker/daughter. The bar groans. "A hooker at a meat packing plant," someone yells. "Maybe a hooker for Christ or one of the 12 apostles."

The woman takes off her shirt to even louder moans. She is yelling, pointing aggressively at an older woman, who appears to be her mother. "Put that thing in the middle of Iraq," someone says. "That'll stop a war." The bar erupts. It is Jerry Springer Happy Hour. Mirth and merriment have come to the Far More.

As Springer toys with the idea of running for the U.S. Senate, he will need these people, his people. According to the Ohio Poll, if the election were held today, incumbent Republican George Voinovich would beat Springer down by 61 percent. It's the kind of spread you'd find for an Ohio State-John Carroll football game.

But here in West Park, a Springer candidacy isn't so ludicrous. This is home to the Irish, Catholic, union -- the traditional core of the Democratic Party. It's an affiliation that comes by birth. "My parents, they voted Democrat for 60, 70 years," says one Far More patron. "They were Irish alcoholics. They just voted for whoever threw the best parties."

Indeed, it's a loyalty that carries few expectations. Dingow once got stuck on a felonious-assault/carrying-a-concealed-weapon beef. "Yeah, I fucked somebody up," he says. "I'm not a Boy Scout." A Democratic judge helped him out. Dingow is grateful. But, he's quick to add, "Just the fact that they're politicians turns me off."

In this land, where bullshit meters are tuned like Severance Hall cellos, the word "politician" is spat, not said. It's an adaptable synonym for "whore," "coward," "scumbag." As in: "Your mother is a politician."

Ask Edward Pierce, a retired Marine whose knowledge of West Side bars is so vast, he should be hosting a consumer affairs show on PBS. He runs down a list of those who've sinned. "Voinovich forgot where he came from," he says. "He's too good for us. Look at Bob Taft: He's slitting everybody's throat."

But when Springer's name arises, Pierce's disdain is checked. "Why not? He's the least of the politicians."

It's not exactly a ringing endorsement, but in many respects, Springer is the perfect candidate for Cleveland.

He is, after all, a self-made man. He took a simple idea -- probing the mating habits of strange Southern life forms -- and converted it into a career where he can afford steak for breakfast and never find his wallet empty at closing time.

He's got a Rust Belt work ethic, hosting shows in the U.S., Britain, and South Africa.

And he's a guy with balls. While Voinovich gets props for standing up to Bush's tax-cut plan -- "I'll only screw the little guy half as much as you want, Mr. President; I'm putting my foot down" -- Springer has spent years being pilloried as a stake in the heart of mankind. Yet he hasn't backed down.

Okay, so he makes his money off people in Alabama who've been impregnated by their brother, who are sleeping with their best friend's husband. Big deal. At least he provides them free trips to Chicago to appear on national TV -- a little vacation, a little respite from government cheese and domestic squabbles.

Think about it: What more has Voinovich done for the little guy during his entire senatorial career?

Besides, as Pierce would say, Springer's the least of the politicians. That counts for a lot at the Far More. It's hard to imagine, say, Dennis Kucinich showing up here, buying a round of herbal tea and talking about his séances with Shirley MacLaine. He'd be duct-taped to the cig machine within an hour.

But Springer is clearly a man at ease with regular people. You can see him sitting at the bar, buying shots, swapping lies, listening to the drunken tales of his newfound pals. They don't expect much from politicians here. But they would, just for once, like to see a real guy on the job, someone with whom they can break bread, spill beer, and not feel like they're talking to a cheap facsimile of a real guy.

If Springer chooses to run, he'll take on Eric Fingerhut in the primary. The state senator from Shaker Heights is arguably the smartest, most capable politician in Northeast Ohio. Which means, of course, that Voinovich would kick his ass. Tim Hagan is smart and capable. Stand him next to Taft, and he looks like the MENSA president helping out a special-ed kid. But Hagan also got his ass kicked. The rednecks of southern Ohio don't want sharp and gifted. They prefer dull, dim, and dangerously inept.

If you believe the polls, Springer wouldn't do any better. But at least he'd put on an entertaining show. Just ask the boys at the Far More. In the party of low expectations, that may be as good as it gets.