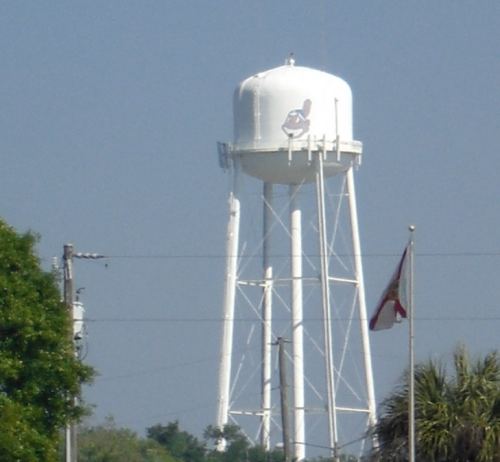 After the Indians decided they would leave Winter Haven for the greener (sandier? desertier?) pastures of Arizona, the city of Winter Haven took the club to court.

Winter Haven sued the Indians on Dec. 31, 2008, claiming the former spring training tenant owed $107,454 in parking, concession, ticket and advertising revenue. The city also sought lawyers' fees and interest on the amount it contended it was owed from the 2004 and 2005 spring training seasons.

They later backed down and reduced their sights to collecting only $58,454.

Now, it's important to remember that Winter Haven doesn't really have a ton of money to go spending willy-nilly, as evidenced by the fact they can't afford to paint over the Chief Wahoo logo that still remains on the town's water tower and the fact they wanted the dough from the Tribe.

Fast forward and we have a settlement, and the final number agreed upon by Winter Haven and the Indians was a tad less than what the city was originally looking for in the suit.

But they still had to pay the lawyers, so the actual dollar amount dipped a little more, according to TheLedger.com.

In the end, Winter Haven ends up with only $5500 after paying legal fees.

Not a lot, for sure, but hopefully enough to finally paint over Chief Wahoo once and for all.