With Massive Potential State Tax Credit, nuCLEus Could Be Back 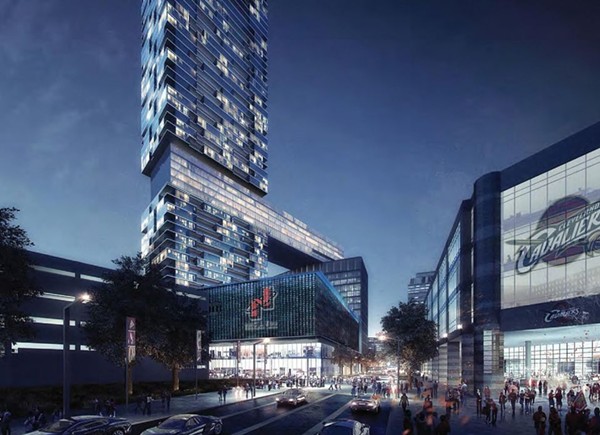 NBBJ
Architect's rendering of the nuCLEus project.
Recent testimony by a Stark Enterprises executive at the Ohio Statehouse suggests that the nuCLEus project is still in the works. Stark Vice President Steven Coven testified in support of House Bill 469, a bill sponsored by Rep. Tom Patton, (R-Strongsville) and Rep. Kirk Schuring (R-North Canton), which would provide a 10 percent tax credit to new "transformational" mixed-use development projects, or TMUDs.

According to the bill, developers or their insurance companies would be entitled to a 10 percent refund from the state on the total cost of major projects ($400 million or more) with at least 20 stories. It's unclear how many projects, other than the proposed nuCLEus mixed-use skyscraper, would be eligible for such an incentive. Rep. Schuring has confirmed that the "genesis" of the legislation was the nuCLEus project. He worked with Bob Stark, of Stark Enterprises, and a nuCLEus financial consultant to shape the bill.

Coven spoke on behalf of the nuCLEus project before the legislature's Government Accountability and Oversight Committee on Feb. 27. His testimony, like much of the advocacy for Cleveland downtown development, was short on facts and long on rhetoric.

"As cities and as a State, we compete on a global level. We compete for talent. We compete for opportunities. We compete to attract new businesses and to retain current businesses," Coven said (his full statement is attached below). "People live differently now than they did 30 years ago. People work differently now than they did 30 years ago. People of all ages want to return to the urban core, both for living and for working, provided that the environment and amenities they want and need have been created in their city."

Coven said the nuCLEus project had the opportunity to be the "hub" that connects all of downtown's amenities: the "financial district, the convention center, the sports arenas, Playhouse Square, the casino and Public Square." Referencing Terminal Tower, Coven said the goal of nuCLEus was nothing less than icon status.

"Can you imagine if the Terminal Tower Complex was never built, what the Cleveland skyline would look like?" He asked the committee. "You can’t, because it is forever associated with our skyline. It is our goal that our great-grandchildren will be saying the same things about the nuCLEus project 100+ years from now."

The nuCLEus project is estimated to cost $500 million. That means Coven was asking for a $50 million dollar no-strings-attached rebate which would be taken from tax receipts from state foreign and domestic insurance premium taxes. Those are currently deposited into the state's general revenue fund.

According to a fiscal analysis by the Ohio Legislative Service Commission, "any reduction to total [general revenue fund] tax receipts would also reduce the amount distributed to the Local Government Fund and Public Library Fund. Any reduction to the LGF and PLF would decrease distributions from the funds to counties, municipalities, townships, public libraries, and other political subdivisions in the state."

Cleveland Mayor Frank Jackson and other city leaders have long decried the shrinking of the local government fund, so they've got a difficult balancing act ahead if they intend to voice their support for this legislation. City spokespeople have not yet responded to questions, initially posed in February, about updates on the city's "stakeholder meetings" with Stark Enterprises.

"Before approving new tax breaks for oil and gas companies, insurers, movie producers and others, the General Assembly should make sure that its mechanism for reviewing existing ones is doing its job,” said Wendy Patton, of Policy Matters Ohio. “Adding new special-interest breaks is ill-conceived when we’ve barely started looking at the tax exemptions and credits we have now. While legislators think about giving away tens of millions for new business tax breaks, they should consider whether we have the money to pay for them, and whether the funds would be better spent educating young Ohioans, cutting our high infant-mortality rate, or fighting the opioid epidemic.”

The nuCLEus project appeared to have been on hold after opposition to a unique tax increment financing (TIF) package last year. The Cleveland school board delayed a vote on the financing arrangement in August when it learned that the city of Cleveland and Cuyahoga County intended to meet with Stark about the financing. CMSD wanted a seat at the table.

Under the proposed TIF arrangement, Stark Enterprises would have been able to use property tax revenues on the site's increased value (an enormous increase) to pay off construction debt. In past TIF agreements, Frank Jackson has insisted that the Cleveland schools not be short-changed, and that the tax exemptions only apply to non-school property taxes.

Under the nuCLEus proposal, though, the schools would only collect the tax revenue that they receive from the current Gateway District site (about $360,000 per year). That's the parking lot between Prospect Avenue and Huron Road across from the Q. In addition, the schools would have received and up-front cash payment of about $18 million. That money might have been bundled with other state funds to build new school facilities in the short-term.

In February, CMSD told Scene that to the best of its knowledge, "stakeholder meetings" between Stark Enterprises, the city, the county and CMSD had not yet occurred. As such, CMSD had no plans to reintroduce the TIF resolution to its board.

Schuring is a Canton-area Republican. He spoke with Scene by phone Friday afternoon. He said that while the bill was designed for the Cleveland project, its applicability is much larger.

"I've got the Ohio Municipal League and Ohio Mayors Association wanting to work with me to see how this would work in other municipalities throughout the state," Schuring said. He said amendments are in the works that would make sure other cities can benefit.

Schuring stressed that this bill was not to incentivize transformational beautification projects, but transformational economic development projects. He said that the bill would complement the economic development sparked by the Historic Preservation Tax Credit. He echoed Coven's remarks about the resurgence of American downtowns — "downtowns are cool again," he said — and denied that the local government fund would be adversely affected.

"There's no cuts to the local government fund," Schuring said. "This is applied to a revenue stream. It's not a line-item. It's applied to the tax liability of the insurers. It will affect the flow of revenue, but as a transformational project, there will be a greater economic impact as far as new revenue. That'll far and away offset the curbed flow."

When Scene suggested that the "greater economic impact" was purely theoretical, Schuring said no.

"No, not theoretically," he said. "We haven't done any research where we have empirical data, but I do enough in the area of tax credits. I know that tax credits can be a valuable tool if there's a proven return on investment (ROI). We know that the Historic Preservation Tax Credit has an exponential ROI. I would submit to you that this would be the same."

Patton (R-Strongsville) was running for the U.S. House of Representatives in the 16th District against former St. Ignatius wideout Anthony Gonzalez and Christina Hagan on the GOP side but dropped out in late 2017. Patton's office said they weren't sure if the Strongsville Rep would have a comment on HB469 — the bill is still in the midst of committee hearings.

Schuring's district encompasses Canton's northern and western suburbs. But there is no building in downtown Canton, for the record, taller than 14 stories.