Mayor Bibb: It's about "giving people a second chance, and making sure that access and opportunity is open to everybody in our city" 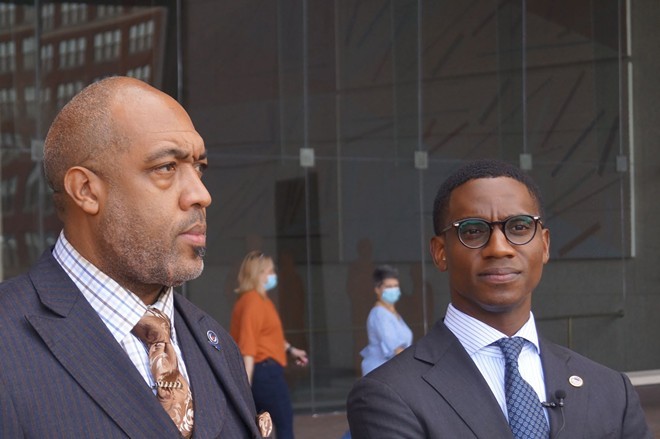 Sam Allard / Scene
City Council President Blaine Griffin and Mayor Justin Bibb, outside the Justice Center. Both were involved in the city's initial attempt, in April, to secure misdemeanor marijuana expungements for 4,077 people.

Nearly seven years before Brian Adams would become one of Northeast Ohio's most prominent cannabis activists, pursuing the path of decriminalization, he was being cuffed behind a bar in Solon for accepting a film roll of marijuana.

This was March 11, 2006, and Adams was a 22-year-old dishwasher. A colleague gifted him a few grams of weed, and as soon as Adams returned to his car, he was flanked by two police cruisers. A month later, a Bedford court convicted Adams of "drug abuse" and fined him $226.

Both the charge and the fees paid lit a fire under Adams, who, in 2017, became a founding instructor at the Cleveland School of Cannabis to educate those interested in marijuana science and state rights. 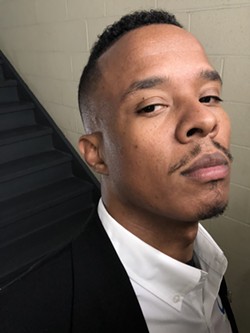 Brian Adams
Brian Adams, a founding instructor at the Cleveland School of Cannabis, often educates students on the bigger picture of marijuana misdemeanor expungements.
that," he said. Adams, who is Black, added: "And these are the types of people who they're targeting with the arrests."

A win for cannabis activists like Adams came on Tuesday when Ohio Gov. Mike DeWine signed legislation that will simplify the expungement of minor marijuana charges.

The approval from DeWine is also a win for Cleveland Mayor Justin Bibb, who, after failing to administer his own mass expungement "test" of 4,077 minor convictions last April, found success in lobbying the state with Sen. Nathan Manning, a Republican from North Ridgeville.

The city said it's aiming to have convictions expunged, and then sealed. It's unclear how each individual will go about having their records cleared, but Bibb himself is confident that the bill, which actualizes in March, will have its intended effect: to prevent job or apartment denials based on petty drug charges.

"This is all about removing collateral sanctions," Bibb said in an interview Thursday. "Giving people a second chance, and making sure that access and opportunity is open to everybody in our city."

The sanctions Bibb speaks of are echoed often at cannabis expungement clinics and rallies, especially leading up to City Council's legislation in 2020 that eliminated fines and jail time for possession under 200 grams. Two years later, they found 455 people were wrongfully charged with marijuana misdemeanors.

Cleveland Municipal Judge Michelle Earley determined the city couldn't legally do anything at the time: the defendants—the convicted themselves—she said, had to be involved in the expungement process.

Bibb said he responded using a tactic Adams himself is known to use—expungement clinics, hosted around the city.

For Adams, who regularly teaches a Cannabis History class at CSC, it's undeniable the impact Bibb and Manning's lobbying had on what fundamentally, he said, is a Black issue. As, according to the ACLU, Black people are 3.4 times more likely to get arrested in Ohio for marijuana possession than white people. (In Cuyahoga County, about twice as likely to be arrested.)

The result is, to paraphrase activist Danny Bakewell, a celebration of a small moment signifying change. Adams hopes that Bibb's success is a notch in the inevitable path to, he believes, full legalization.

"The new decriminalization wave is indicative of what the people of Ohio feel," Adams said. "Anything that helps those folks get out of the system quicker, I'm all for it."

Editor's note: A previous version of this story gave the wrong age for Brian Adams at the time of his arrest for drug abuse. We regret the error.