With Pride in the CLE This Weekend, Here's a Reminder Why We Don't Need 'Straight Pride Month' 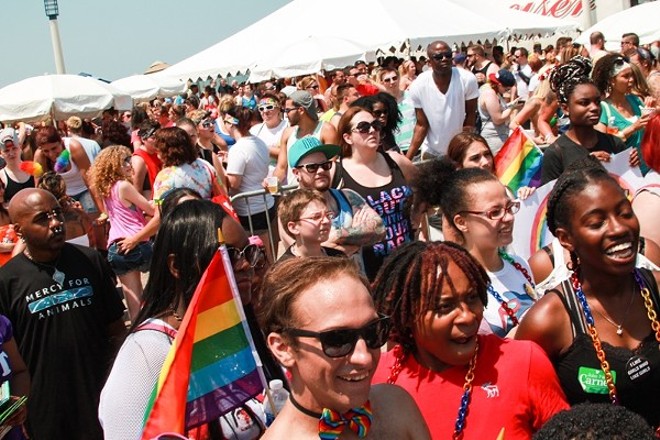 Emanuel Wallace
In honor of the Stonewall Riots in June 1969 that sparked the continuing civil rights movement for the LGBTQ community, June is nationally recognized as Pride Month. The purpose of Pride month is to honor, celebrate, and affirm LGBTQ individuals and our contributions to society.

For the first time, Cleveland is hosting a unified event for the month, titled Pride in the CLE, while cities all across the country are celebrate in similar fashion to proudly proclaim that we are here, we are queer, and we aren't going anywhere.

In recent years, President Bill Clinton declared June as the official "Gay & Lesbian Pride Month" and President Barack Obama declared June "Lesbian, Gay, Bisexual, and Transgender Pride Month." Currently, Donald Trump has not acknowledged or declared any sort of honoring of LGBTQ citizens, despite claiming he would fight for LGBTQ people while simultaneously revoking healthcare protections and trying to force trans soldiers out of the military.

Heterosexual and cisgender (meaning, identifies with the gender assigned at birth) individuals are seen as the normative way of life, and are honored and protected in every culture across the country.

Straight people don't have to fear that they'll be denied housing due to their relationship status. Cisgender people don't have to fear that a politician is going to harass them outside of a bathroom stall while they're just trying to take a piss. Straight and cisgender people have been represented in every film, television show and music style since the beginning of time.

The overwhelming majority of advertisements are geared towards heterosexual and cisgender people, and it's still legal for people to fire someone for being gay in the state of Ohio.

The LGBTQ community has been marginalized for centuries, and the fact we're finally receiving a semblance of attention or equality has caused the far-right to do everything in its power to continue to persecute us simply for existing.

Yes, we have seen incredible progress in the fight for LGBTQ rights, but we are nowhere near where we should be. The fact that holding my girlfriend's hand in public puts me at risk for physical abuse is disgusting, but for LGBTQ people, it's any other day.

The unfortunate reality is that since the beginning of a new administration in America, the FBI has reported an increase in hate-crimes against the LGBTQ community.

The statistics for crime against LGBTQ community members of color are even more horrifying.

For many in the LGBTQ community, Pride is the only time of the year when they feel comfortable and safe living their truth and being themselves without fear of violence or ridicule.

Sometimes, this expression of truth includes scantily clad outfits or a flourish of colors. This isn't because the LGBTQ community is inherently hyper-sexual, it's an expression of liberation and freedom.

Quite literally, LGBTQ members sometimes choose to dress as loudly and visibly as possible, ensuring that their existence is something that cannot be ignored.

Straight and cisgender people get to exist out and proud without any fear of discrimination about their sexual orientation, gender identity or gender expression, every second of every day. This is a privilege that many LGBTQ individuals will never get to experience.

If you're a straight ally attending Pride in the CLE this weekend, take the time to remember why you're there in the first place. Pride isn't just a time to quote RuPaul's Drag Race with a large group of people covered in body glitter, it's a radical expression of political defiance in the name of equality. We as LGBTQ people need your allyship and support to enact real change. Please remember this.

If you're someone still wondering why there's no 'Straight Pride Month,' take a step back and realize that not everything is about you.

Pride month is not about excluding straight/cisgender people or claiming that being LGBTQ makes someone superior, it's a month to lift up a marginalized community to the level of equality and pride that straight people experience every day of the year.

You can be proud of your straightness or of your cisgender status, but realize and accept that you experience a level of comfort and privilege that LGBTQ people will seemingly never reach.

Be proud of the love you share with another person, and be grateful that you'll never have to worry about someone taking away your livelihood or even your home for loving them the way that you do.

Safe spaces for queer people are dying out. While this can be seen as a good thing (we can actually go to non-gay bars and feel somewhat safe!) it's also erasing casual opportunities for LGBTQ members to meet and unite. Pride allows us to re-align as a community, and to be reminded that we are never alone. This is why we need Pride month.