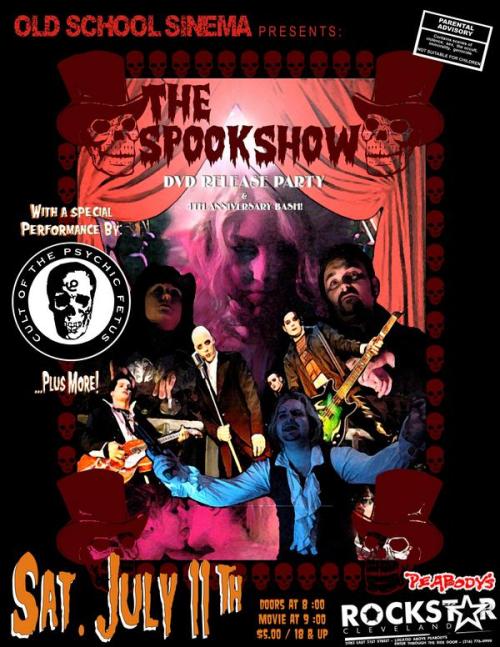 Featuring a screenplay by Scene contributor Bob Ignizio, The Spookshow, the fourth release issued by the local production company Old School Sinema, is now out on DVD. To celebrate the release, the Old School folks are throwing a bash at Rock Star, the VIP located upstairs at Peabody’s (2045 E. 21st St., 216.776.9999, peabodys.com). They’ll screen the movie (along with a few fake horror trailers) at 9 p.m. and local pyschobilly band Cult of the Psychic Fetus will play after the screening. Spookshow director Joe Ostrica describes the movie as a “supernatural/rock ‘n’ roll/slahser/exploitation/revenge thriller.” “Basically, most of the movie takes place in one night at a rock show on Halloween,” he explains. “There’s a legend that a girl had died at the club and that her ghost is possessing the place. A group of college-aged kids goes to the show and one of the girls gets possessed by the ghost and goes on a killing spree.” Filmed mostly at Peabody’s where Ostrica says “there’s a lot of places to stash dead bodies,” the film was shot entirely in Cleveland. Tomorrow’s screening represents the first time its final cut will be shown. Ostrica says he’s already at work on two new films: Demon Camp and She-Devils A-Go-Go. Admission is $5 and DVDs will be on sale for $15 (but you can buy all four Sinema DVDs for $25). Contact Ostrica at [email protected] about ordering DVDs or visit his myspace site at myspace.com/ossprojects.