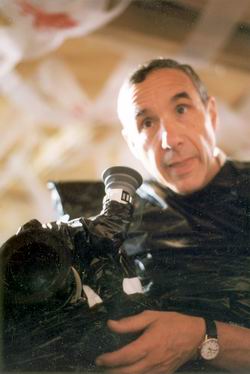 What about the Net?
Net neutrality is safe for the time being but the industry consolidation has threatened the independent content providers. The independents are very important. Troma is a perfect example. We financed Samuel Jackson’s first movie. Trey Parker and Matt Stone’s first movie was a Troma movie. The Toxic Avenger was nothing until I discovered it. Lots of people have been given their start through Troma. The problem is that something like Citizen Toxic, which is the best of the Toxic Avenger movies, has never played anywhere on American television. Not even on crappy channels like Cinemax. Comedy Central wrote me a snotty letter where they say Cannibalism: The Musical is not up to the standards of Comedy Central. The nerve of those people! What does Comedy Central have other than South Park?

Poultreygeist got generally good reviews. Were you disappointed it didn’t have better distribution?
We do our own theatrical distribution It was the highest growing screen in country, but we got kicked out because Indiana Jones had to take up all the screens. I saw with my own eyes that no one was going to see Step Up 2 the Streets. It’s a cartel that doesn’t serve the public.

With that in mind, is self-producing a film really the solution?
Well, no. Early in my book I suggest the Troma model is similar to my wife’s 1969 Mustang. It may get you down the highway but it overheats and yes it may have brand new tires but in this market environment, it may not be the right business model unless we can bring some justice. We’re trying to educate the lawmakers and policy makers. The independent content providers are the locomotive of innovation. We’re the job creators. We create jobs and content that helps balance the trade. We’re exporting huge amounts. We’re the true lovers of the moving image, but we have to fight to survive because the playing level is so against us. But the point of my book is that for the first time, the democratization of filmmaking has become a reality. You had to be rich before and spend thousands. Now, everyone can make a movie. If you want to produce your own damn movie, you can be a schoolteacher in Cincinnati and have a life and do something productive and still write a good script and make a good movie. But the problem is that you can’t get to the public. The means of getting to the public are in the hands of these major conglomerates. The big hope is the Internet. That’s the only reason my company exists. Toxic Avenger is now a musical on Broadway and now it’s opening on October 31 in Toronto by the same producer who did Jersey Boys. The movie that not even one theater would play when we first made it is now a musical with the keyboardist from Bon Jovi. We have other offers on the table, too. The point is that we made these movies that cost nothing and people are interested in remaking them.

I believe you’re now 63 years old. Any plans to retire?
It’s almost forced retirement. It’s like I don’t exist. In Russia, Stalin used to murder people but his successors Kruschev and Breshnev just took away people’s passports so they couldn’t work and that’s what goes on in this country. They take away our ability to work. All the market it controlled by four or five companies. If you want to play their game and wear the Mickey Mouse outfit, maybe you can direct movies. We started Troma in 1974 with no money but we made movies that appealed to the market and were thought-providing and we had a way to get the market. But Clinton has closed off television so we’re fucked. We as a group can reshape the landscape. We have to scare the conlomerates. But as Jimmy Stewart says, the best causes worth fighting for are the lost ones. It’s either fight or die.