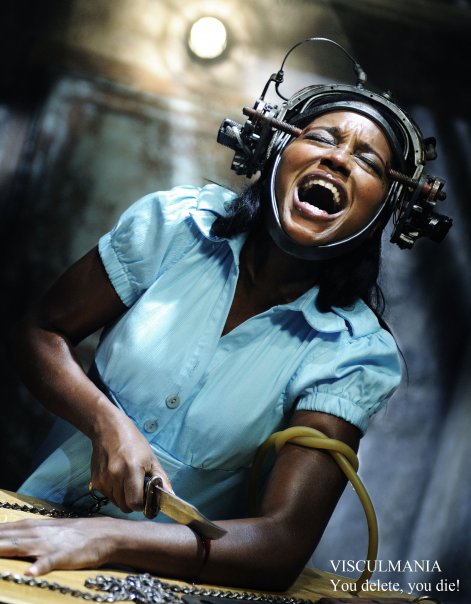 Granted, Saw VI is better than last year's Saw V, but that's like saying waterboarding is better than electrodes to the genitals, or listening to Glenn Beck is better than listening to Rush Limbaugh; it's all torture when you get down to it. The latest installment in the series that heralded torture-porn horror actually makes a goofy bid for relevance by having as its victims a few predatory lenders and health-insurance weasels. Get that health-reform package passed or else! We learn that the moralizing serial killer John "Jigsaw" Tuck (dead for three sequels but again played by Tobin Bell in flashbacks) got shafted by his insurer when he was stricken with cancer. Now the yuppie-scum executive responsible is run through hideous ordeals in an abandoned zoo festooned with fiendish machinery of pain, death and dismemberment. In a concurrent (and really barely related) plotline, glowering police detective Hoffman (Costas Mandylor), one of Tuck's escalating number of secret "partners" (a new one revealed every couple of sequels keeps this tiresome saga chugging along), tries to cover up his identity as the new Saw boss. One cool twist at the end, but after teasing audiences with the suggestion that this one wraps it up, the finale promises more sequels ahead, in which no doubt the dead hand of Jigsaw will rule on such critical social ills as global warming, casino gambling in Ohio, and bitter and lonely freelance film reviewers who aren't paid near enough to watch this slag. * 1/2