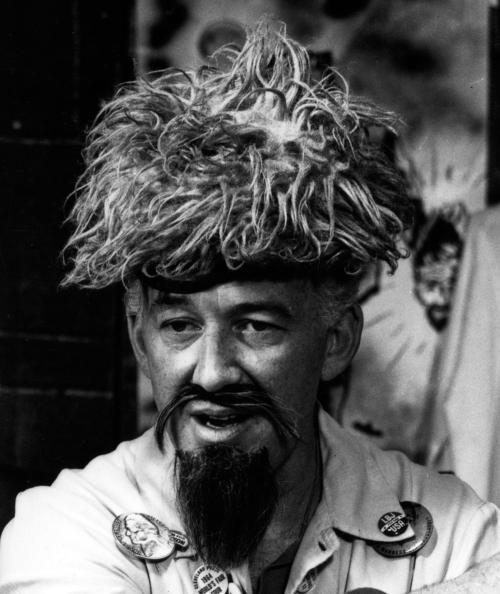 Based on a book by Gray Publishing, Turn Blue: The Short Life of Ghoulardi is an hour-long documentary about the infamous Cleveland late-night horror movie host. Directed by Phil Hoffman, a University of Akron professor and general manager of University of Akron’s Z-TV, it shows how Ghoulardi (Ernie Anderson) went from being a cast-out to the king of Cleveland TV during his short reign from 1963-66. It premieres at 9 tonight on Western Reserve PBS 45/49 and has subsequent airings at 2 a.m. Wednesday, Oct. 28 and at 4 p.m. Saturday, Oct. 31. It’ll also be shown on Western Reserve Public Media’s new Fusion channel at 8 p.m. Thursday, Oct. 29 and at 7:30 p.m. Saturday, Oct. 31. Hoffman, who hopes to have the film out on DVD by the end of the year, recently spoke about his movie.

You showed the film this past weekend at Ghoulardifest. How did that go over?
It was really crowded and that was awesome. I have no way to gauge the attendance because I’m not sure if the physical size of the facility was the same as last year’s. But I do know the place was jammed, so that was good.

That is probably your toughest audience. How did viewers react?
It’s always great to sit in the back of a theater when you produce something like this and see if people react the way you thought they would. In this case, I felt like I hit the nail on the head. At one point, they all burst out singing along with the film. Those kinds of things happen and you go, “OK. I did that right.”

At the beginning of your movie, you talk about how Ernie Anderson was fired from most of his gigs. How did he last so long in Cleveland?
Well, it’s funny because he came here to work at WHK radio and he didn’t last very long there. In that case, he left of his own accord and then went to Channel 3 and didn’t last long there either and left of his own accord there. Really, when he came to WJW, it was ’62 and he was gone by ’66. It was a relatively short tenure. He was a restless guy. He was always looking to go to the next thing. As a creative person, he didn’t want to get into a rut. He was feeling like he was in a rut toward the end.

The character of Ghoulardi had a unique look and his own set of slogans. From where did Anderson get that material?
A lot of it was just plain Ernie. He was an unusual guy. He was a big fan of jazz music and if you think of a beatnik type of a character, that was Ernie. He disguised himself as Ghoulardi and the real Ernie came out to a certain extent. Part of it was that when he worked at WHK, there was a guy on there with him called Pete “The Mad Daddy” Myers who was an early rock 'n’ roll DJ who was rhyming and jiving and a little bit of that rubbed off on Ernie in terms of his delivery style.

You did a great job of tracking down the local characters he knew Anderson. Was there anything you were surprised to find out about him?
I was surprised that he was so careless about money. That didn’t wind up in the film but it will be on the DVD extras. Big Chuck talks about how Ernie left and he was in California and he was talking to him on the phone one day and Ernie asked him to go in his desk and see if he left anything. There were like nine un-cashed checks lying there. The idea that you would leave paychecks lying around boggles my mind. But it shows Ernie’s character. He wasn’t motivated by money necessarily though I’m sure he liked it. It wasn’t the primary factor for him. He just liked doing what he was doing and when he got tired of doing it, it was time to move on. The more that I learned about the guy, the more I could relate to him. If you’ve ever worked in media at all, sometimes you get frustrated with your bosses and feel they don’t understand what you’re trying to do. Not only was Ernie like that but he was one of the first guys to go on air and mock his bosses.

You mention his son, movie director P.T. Anderson, in passing. What did you learn about his relationship with his father?
We contacted Paul about being in the film and his response was that he wasn’t born yet and has no memories of Cleveland. He was coming off a film and was fried. I thought it was interesting that Ernie secretly harbored the notion that he would be in a classic film of some kind that would last beyond his days. It just never happened but you look at Paul’s work and that’s obviously going to be around for a long time. It’s kind of ironic.

Many of the people you interview are nostalgic for that era in TV history. Do you think there will be another Ghoulardi in TV culture?
I have to say that TV has lost its ability to have that kind of impact. Everything is nationalized now. The local product is mostly news. That’s one of the things that got me started in looking at this film. If you get off an expressway anywhere in the United States, everything looks the same. You have the same stores and restaurants. You can go into a store in Albuquerque, New Mexico and it is the same as one here in Tallmadge. That kind of bums me out. I like going to different areas of the country and finding that quirky, unique, local flavor. TV was part of that and it isn’t now. You flip on the local channel and you’ll see Access Hollywood or whatever. It’s all the same stuff. There are formats that fundamentally don’t change from market to market. That’s the thing I miss the most, that local flavor you used to get. It’s not as pronounced anymore. It’s not that it’s not there but it’s not as easy to plug into.