Gogol Bordello Non-Stop has its local premiere tonight at CMA

A documentary about the gypsy punk band Gogol Bordello, Gogol Bordello: Non-Stop has its local premiere tonight at 7 at the Cleveland Museum of Art Lecture Hall. Here is our review of the movie. 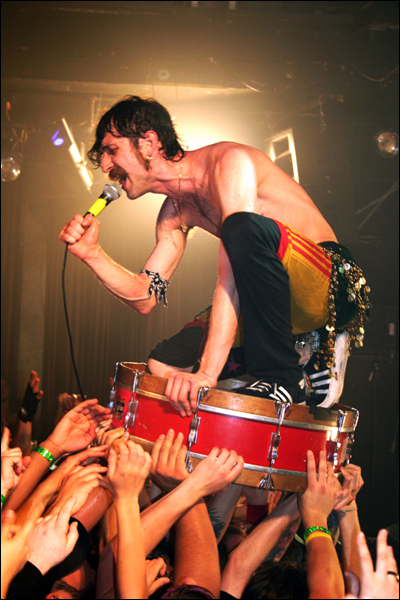 Gogol Bordello Non-Stop (U.S., 2008) Margarita Jimeno’s unfocused documentary about gypsy-punk band Gogol Bordello has one thing going for it: It truly captures the manic energy that frontman Eugene Hutz and his band of merry pranksters bring to the stage. We see Hutz in several different contexts: DJing a basement party, performing on the street, opening for Manu Chao at large outdoor festivals. And each time, the guy doesn’t disappoint, stage-diving and running around like he’s possessed. Jimeno unearths rare footage from the early days, when the band was still formulating its theatrical stage show in small New York bars in the late ’90s. And she interviews several musicians who have played in the band. But the film never develops a narrative, only occasionally touching on Hutz’s background as a Ukrainian refugee. He’s become such a notable movie star, you’d think at least a portion of the film would touch on that career too. ** 1/2