At some point, maybe this year, a grand jury may hand down indictments in what will come to be known as “The People vs. Jimmy Dimora and Frank Russo, et al.” More than likely deals will be struck. But who knows — maybe we’ll be forced to endure spectacle of public officials standing trial. In either case, it will dominate the news for months, maybe years, allowing the real criminals to walk away, chuckling to themselves. 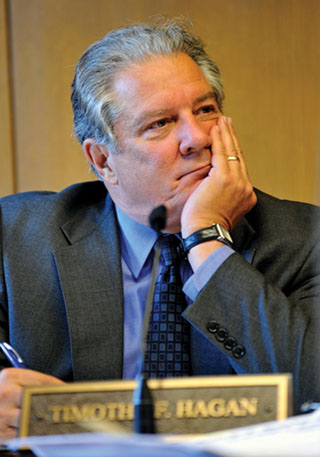 Tim Hagan and Chris Kennedy, I’m looking at you.

Technically it’s not a crime to be an arrogant prick. For some, that’s the real American dream, to have the wealth and/or power to turn over control of your mouth to your id. But it’s still a shocking thing to see in someone who’s not a twentysomething pro athlete or pop singer.

Hagan made no secret of the fact that he fancied himself a fixer, a man with a plan, when he ran against then-County Commissioner Tim McCormack in 2004. “What I heard was that there is a paralysis at the commissioners’ office,” he told Free Times then, “and that McCormack in particular is unable to work with people in a way that is constructive.”

“But above all,” Free Times noted, “he’s critical of the chaotic bickering that surrounded last year’s proposal to build a convention center. ‘You don’t try to put something on the ballot unless you’re ready to lead the way,’” he said.

But leadership can be so tedious, what with all the inspiring and persuading and reassuring it calls for in hard times. So much easier just to get into office and do what you want, ignoring or attacking any who dare to ask questions. All it takes is unwavering faith that you’re the only one who understands what must be done, the only one willing to shoulder the enormous burden of saving the dumbass proles from themselves.

But the road to a new convention center has been long, and Hagan’s patience has been worn thin. He’s pouted and complained with candor that’s anything but refreshing, sounding like an overbearing parent who never misses a chance to note how shiftless and ungrateful his children are. After reluctantly conceding to reveal details of the county’s half-billion-dollar deal with Merchandise Mart Properties Inc. of Chicago — to avoid a lawsuit by the belatedly skeptical Plain Dealer — Hagan essentially revealed that he won’t listen to feedback anyway. “I’m hard-pressed to believe that people who have not been a part of [the negotiations] will have greater insight than people who have been a part of it,” he said, mocking us all for ignorance that he’s fostered. 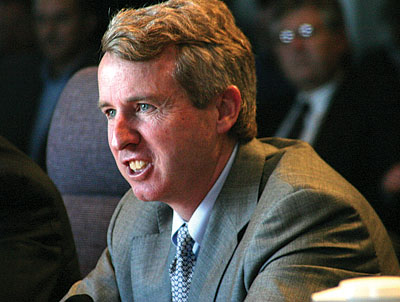 So it’s easy to see why he’s friends with MMPI president Chris Kennedy, who recently complained to the PD that Cleveland is Losertown, U.S.A., with a lousy attitude and no leaders — except he-man Hagan, of course. “Who else could get us to come there?” he asked. “Nobody’s doing business in Cleveland.”

(Almost as maddening as being pissed on by an out-of-towner is hearing neighbors agree with him. After the quote above, the next line of that Plain Dealer report was: “The medical mart project is Cleveland's biggest hope for a rebirth.” Really? Why, because the petulant rich guy from Chicago says so? Then Councilman Kevin Kelley told Scene, “Chris Kennedy is right: Nobody is knocking at our door. We’re in a position where, even if there’s some risks, we have to take them.” Or, to paraphrase: Sure, he’s gross and he’s only after one thing — but who else would ask us to the prom? Pathetic.)

Commissioner Hagan knows what’s best for us, and we should really just do as he says. That was subtext of comments he made on WCPN’s The Sound of Ideas recently: “We have a representative democracy, not a direct democracy,” he explained patiently. “Now, you and others have every right to criticize those of us who are elected to make decisions. But ultimately, it’s representative democracy and you make your decision after some discussion. I think that’s being lost in this debate. Ultimately, that’s why you have elected officials. You don’t do it by the crowd or by 16 people criticizing you. There are 1.3 million people in the county, that’s who you represent, and you make your best judgment, and if the people are not satisfied with your judgment, they throw you out of office.”

And until then, shut your pie holes.

Last year, when The Plain Dealer was still cheerleading for the project, Hagan sniffed at Free Times’ suggestion that there might be something unseemly about his close personal relationship with Kennedy’s family. “A conflict is when I benefit financially from a decision I make. That’s what the state statute says," he said, adding: “How do people think decisions are made?” How indeed.

But suddenly, his connection to the Kennedys is all he wants to talk about. Why? Because PD editorial writer Christopher Evans, speaking on WCPN, referred to Hagan as a “pimp.” It was an unusually blunt — and astute — assessment for someone in the mainstream media; they’re usually painfully circumspect, terrified of straying from the confines of Objectivity. But thin-skinned Hagan was ready. Taking a page from Karl Rove’s playbook, Hagan pounced on this opportunity to change the subject and turn a weakness into a weapon, hoping we’ll all confuse his belligerence with substance.

At a recent commissioners’ meeting, he went off on a rant clearly intended to knock the PD and all other critics of the med mart scam back on their heels. Video of his tirade is posted at Cleveland.com (“Cuyahoga County Commissioner Tim Hagan rips Plain Dealer coverage of medical mart project,” March 26), and it’s worth checking out. After outlining his ties to the Kennedy family, he proceeds to whine about and lecture to the media as shrilly as anyone who ever served in the Bush administration.

“I would suggest the Cleveland Plain Dealer has personalized this by calling me a pimp and questioning my relationship with people,” he says. “The role of the press is to seek the truth and to hold us accountable. I have no objection to that. But when they make it personal, people ought to ask the question, ‘What is this all about? Why have they moved to make this a personal kind of attack?’
“They may think that they are divinely inspired as a group of individuals, or they may think that those of us who would question the infallibility of the press are somehow anti-press — I’m not … I offer this in the spirit of saying to this community we better ask ourselves where we’re going when the press can become so out of control for the purpose of seeking readership while the paper’s in decline … No one can question the fact that that’s what’s happening in this town. Ask the people in this room if I’m not expressing their view. Because I am. I have the confidence of knowing that I am.”

Of course he does.

So I feel like I owe Jimmy Dimora an apology. I’ve said and written about the accusations against him and how they tarnish us all. But frankly, such garden-variety corruption seems quaint now in the wake of Hagan’s revelations. How do people think decisions are made, he once asked, and lately, he’s been doling out clues to the answer. They’re made in closed meetings by powerful men with coinciding interests and a shared contempt for the people whom they always stick with the check. — Frank Lewis