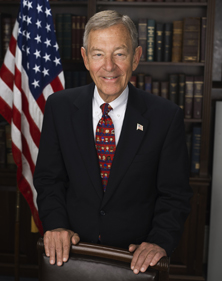 "I voted against this bill because it is weighed down by too much spending that is not stimulative and will not provide the jump-start our economy so desperately needs. Instead of funding federal responsibilities that are shovel-ready, like highways, sewers and housing, which would put people back to work quickly and the results of which would contribute to our nation’s economic growth, this bill is filled with items that should be funded through the regular appropriations process and compete with other federal priorities in President Obama’s budget request. Our nation is facing a catastrophic debt and this bill simply adds to that debt without fulfilling the well-accepted stimulus criteria that the funds be timely, targeted and temporary."

But it passed anyway, and now the senator's principled response is showing constituents how best to line up with their hands out:

… May 7, U.S. Senator George V. Voinovich (R-OH) will host a grants seminar in Columbus. The free event targets faith and community-based organizations and others who are interested in learning more about the availability of federal grants and specific programs from The American Recovery & Reinvestment Act (ARRA) of 2009. This event is closed to press.

Each year, Sen. Voinovich receives numerous inquiries from constituents seeking funding for a variety of projects, initiatives and programs in their communities. In order to make the application process more clear, he has invited several state and federal agency representatives to Columbus to help direct Ohioans toward the key resources readily available from the federal government. This event is an opportunity to learn more about both federal grant opportunities and the specific federal and state programs which will distribute funding from the ARRA. Attendees will be free to ask questions directly of agency representatives and network with fellow Ohioans.

So unless all those "faith and community-based organizations" are coming with "shovel-ready" plans to build highways and new houses, this would make the famously "moderate" Voinovich something akin to a hypocrite, right? No wonder it's closed to the press. — Frank Lewis