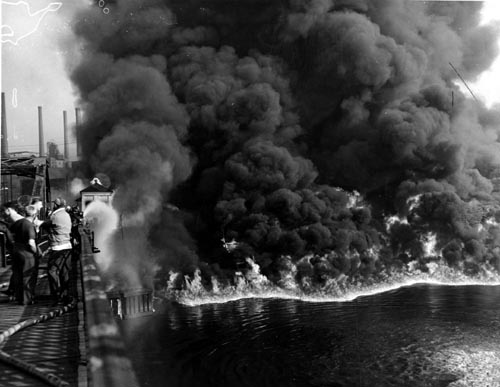 The 1969 fire on the Cuyahoga River wasn’t the first or the biggest on the river. But when the Cuyahoga caught fire on June 22 of that year, the attendant publicity — and ridicule — drew attention to the river’s extreme pollution and helped launch the environmental movement. Randy Newman and R.E.M. both referenced the event in songs, and it inspired the names of an early ’70s Cleveland underground newspaper, a local blues band and an annual environmental festival. Now, the 40th anniversary is spawning celebratory events focused on a much cleaner river.

As the release from Cuyahoga Valley National Park, says “For years, the burning river was a national symbol of how we had failed as stewards of the environment … Happily, the Cuyahoga is making a comeback. Once a source of shame, the river is now an inspiration, demonstrating how people can heal a damaged river.”

On June 20, CVNP, which includes 33,000 acres fronting the river, will celebrate the Year of the River with a series of special activities. Among them: hikes with park rangers along the river, chats with Watershed Steward volunteers and a 3-5 p.m. ranger talk about greening your home, all at the Boston Store Visitor Center (1548 Boston Mills Rd., Peninsula); the opportunity to visit Wildlife Watcher volunteers from 10 a.m.-5 p.m. at Station Road Bridge (13512 Riverview Rd., Brecksville), Beaver Marsh (on the Towpath Trail between Ira and Hunt Farm Trailheads) and the Bath Road heronry at the intersection of Bath and Riverview roads in Akron; and stories and crafts from noon-4 p.m. at Park Place (1593 Main St., Peninsula). Go to nps.gov.cuva for more information on both park activities and the Cuyahoga River or call 800.445.9667.

You can also watch artists working alongside the river in Peninsula’s First Annual Plein Air competition, “Along the Crooked River.” They’ll be there from 10 a.m.-3 p.m. Saturday and 11 a.m.-1 p.m. Sunday. Go to explorepeninsula.com for information.

On Monday, the actual anniversary of the infamous fire, there will be a public event from 11:30 a.m.-1:30 p.m. at Settler’s Landing in the Flats, with a press conference bookended with sets by Cleveland jam band Waterband. It’s sponsored by the Northeast Ohio Regional Sewer District, the Cuyahoga County Planning Commission, the Cuyahoga River Remedial Action Plan and the City of Cleveland. That will be followed by hikes, games, crafts, folk singers and other activities at Heritage Parks I and II on the river from 2-8 p.m. sponsored by the nonprofit Cuyahoga River Community Planning Organization. The day will conclude with a drum circle and a “blessing of the river.” Check-in is at the cabin under the Detroit-Superior Bridge on the Flats’ East Bank.

And from 4:30-10:30 p.m. the Great Lakes Brewing Company, which puts on the annual Burning River Festival (this year on August 15), will host a “kickoff” event for the festival with music by the Kristine Jackson Trio from 5-8, and menu specials all evening.

Next celebration: the anniversary of former Mayor Ralph Perk’s hair catching on fire in October, 1972. Sadly, that one did not launch a movement to clean up political pollution. — Anastasia Pantsios