UNDER PRESSURE, DIMORA STEPS ASIDE, BUT NOT DOWN 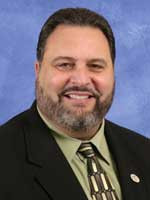 King Dem Jimmy Dimora won’t step down as chairman, despite the allegations that he and other friends at the top partied on developers’ dimes and used his party hall to launder dirty money meant for favors. But he will step aside for awhile, starting July 1.

That’s the word from Cuyahoga County Democratic Party HQ on Tuesday morning, where executive director Mary Devring announced that vice chairwoman Pat Britt would take the reins for this year’s 58 municipal elections, while Dimora battles the Demons of Doing Business.

Devring insisted that Dimora made his own decision to send out this letter on Tuesday morning to party faithful: “I am doing this at this time for the good of the Party. I want to focus on my duties as Cuyahoga County Commissioner and to also clear my good name.”

That wasn’t good enough for Ohio Democratic Party chairman Chris Redfern, who wrote Dimora later Tuesday and urged him to resign and not just disappear for awhile.

“It has become apparent to me that your effectiveness to lead the Cuyahoga County Democratic Party has been irreparably harmed,” wrote Redfern.

Without Dimora’s resignation, the party cannot formally pick another chairman. Actually, without Dimora, the party apparently can’t even wipe its own ass. — Dan Harkins