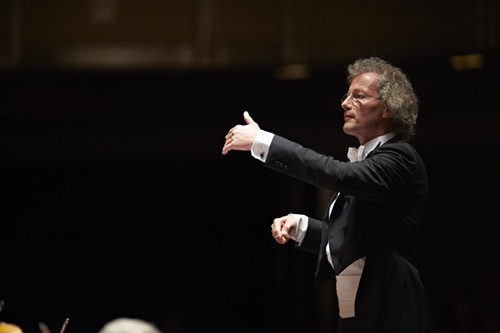 Cleveland Orchestra Music Director Franz Welser-Möst has a house on Lake Attersee in Austria, which is where Gustav Mahler composed his third symphony. That should give him special insight into the piece, an exuberant celebration of the natural world inspired by the spectacular mountain setting.

But it was less a sense of place than a matter of approach that shaped the Cleveland Orchestra’s season-opening concert at Severance last night, which was devoted solely to Mahler’s longest (95 minutes) symphonic work. In a discussion before the concert, Welser-Möst noted a significant difference in his style, not just with Mahler but across the board.

“Most orchestras play louder and louder these days,” he said. “On purpose, I sort of go against that.”

The conductor’s less-is-more approach was clear from the opening bars of the first movement, when he established a slow, stately tempo with crisp, understated percussion, muted colors from the horns and just a hint of drama in the orchestra’s signature silken strings. This is no small task with Mahler, and particularly in the first movement of this piece, which is an amalgam of two march themes, reinforced by staccato phrases on the snare drum. The temptation is to run with that by building the volume and tempo to an emotional peak, like hiking a mountain trail to a scenic summit.

But Welser-Möst kept the sound tightly controlled and carefully modulated, with perfectly smooth and natural crescendos that swelled rather than splashed, savoring the music instead of attacking it. At times, the tone was almost playful — not a word one normally uses to describe Mahler.

A well-crafted second movement played to the delicacy of the score, which interlaces warm, lilting strings with lustrous woodwinds. The gossamer textures that Welser-Möst wove in some of the string passages were breathtaking.

The conductor picked up the pace in the energetic third movement, but never lost the fine balance in the sound, particularly in his handling of the offstage trumpet, which floated elegantly over very fine strings and rounded French horns. The sound thinned out a bit and verged on shrill in the full orchestral passages, when Welser-Möst picked up the tempo, particularly in the animated coda.

The very limited vocal part in the fourth movement did not give Ukrainian mezzo-soprano Zoryana Kushpler a chance to show very much. Her voice, dark and surprisingly powerful coming off the Severance stage, seems better-suited for opera, which is where she has focused her career. It would be interesting to hear her sing Verdi or Wagner, which she has done at the Vienna State Opera under Welser-Möst’s direction.

The female half of the Cleveland Orchestra Chorus and the full Children’s Chorus were not especially sharp in their brief parts in the fifth movement, though it was delightful to hear Welser-Möst bring out the folk elements in the music. And he maintained admirable control in the final movement with admirable control, eschewing explosions of sound for sensitive solo lines and a lovely cascade of phrases in the finale, which fell slowly and gracefully, like a waterfall seen from a distance.

In all, it was a very satisfying opener, offering a reminder that there are still fresh interpretations of Mahler to be found — and of a reputation that Welser-Möst stated succinctly before the concert: “The Cleveland Orchestra has always been known as an extremely well-tuned machine.”