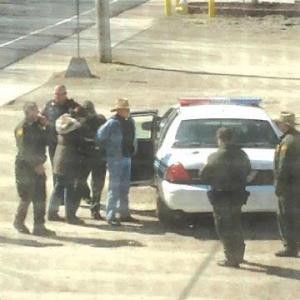 Update: Neither Robert Pierce nor his wife were arrested or charged with any crimes after their misadventures in Marblehead and Robert's protestations that gravity doesn't exist (oh, and that whole maybe, sorta threatening President Obama thing).

But a fun little ancillary bit of news arrived this morning: Catharine Pierce has made national news before. She was the infamous g-string gardener of Boulder, Colorado that fascinated the nation back in 2010.

We look forward to her next embarrassing moment in the media spotlight. — Grzegorek

Last Saturday, a man alternately claiming to be Dwight Eisenhower’s illegitimate son and Peter Pan terrorized the patrons of Avery’s Café in Marblehead, reports the Sandusky Register. When his misguided ranting—which included proclamations like “Gravity doesn’t exist” and “Bayshore Road is the gateway to hell”—escalated to threats of killing President Obama, café employees called Marblehead police, who promptly turned Dwight Jr., aka Robert Dale Pierce, and his wife Catherine over to Border Patrol for questioning by the U.S. Secret Service.

“I received a call from (a cafe employee) who stated that he had a male and a female in Avery’s Cafe and they were making threats towards the President of the United States… He also advised that they were heading to Washington, D.C., to make some things straight. (The employee) also stated that the couple seemed very unstable and his staff feared that this couple may follow through with the threats.”

Police found a .22-caliber rifle, a bag of rounds and six bottles of oxycodone in the Pierces’ Colorado-plated rental car, as well as a “container of suspected marijuana seeds” in Pierce’s pocket. What can we say, the Lost Boys like to party. Obama’s security detail ain’t got nothin’ on those marijuana seeds, so we’re relieved the couple’s in custody. Also, advice to Pierce: blame it on that punk Rufio. Works every time.