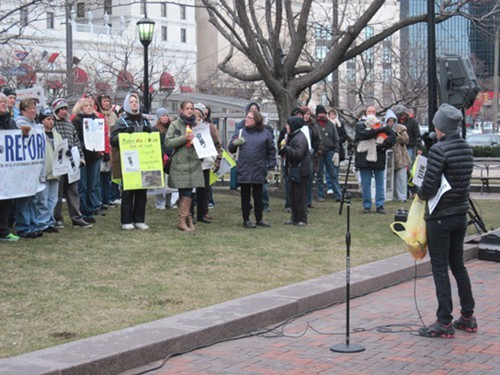 The Public Animal Welfare Society of Ohio led the event, which comes on the same day as Raymone Clements' trial in federal court. Clements shot his bull mastiff, Forrest, in a Cleveland Heights park last fall. He is charged with several counts of possessing ammunition and firearms as a previously convicted felon. His trail includes no reference to animal cruelty.

Forrest now lives with Robin Stone and Patti Harris in Solon. He has become, in many ways, the face of the animal protection movement. Supporters are rallying around the notion of improving and tightening animal cruelty legislation in the state. Other dogs, like Herbie, have garnered a great deal of media attention, as well.

Amy Beichler, executive director of PAWS Ohio, said this morning that the event was the first time ever that animal protection causes had been promoted in Public Square.