League Park, the site of the 1920 Cleveland Indians' World Series victory — and Babe Ruth's 500th home run nine years later — will officially open to the public on Saturday as a rehabilitated testament to the power of baseball.

Here's our April 2013 feature on the ballpark and the restoration plans. At right is a photo of the old ticketing office, worn down amid a neighborhood that similarly fell by Cleveland's wayside over the past 50-plus years.

This proposition comes up every five years or so. "League Park! How about it?" Even as far back as 1979, not too long after the original stadium was demolished, developers were seen scouting the property for signs of future baseball-themed profits.

City Architecture is behind the $6.3-million plans. That money will be released via the city's general-obligation bond proceeds and Ohio Cultural Facilities and ward allocation funds.

Groundbreaking took place Oct. 27, 2012. "People will come to Cleveland," Mayor Frank Jackson said at the time, evoking, perhaps unintentionally, James Earl Jones' soliloquy toward the end of Field of Dreams. City leaders are banking on League Park acting as a destination totem for the near east side.


From the city of Cleveland: The opening ceremony, set for 1 p.m. Aug. 23, will include the unveiling of the Fannie M. Lewis sculpture, the official League Park ribbon cutting, an appearance by the Cleveland Blues vintage baseball team, a Home Run Derby and much more. 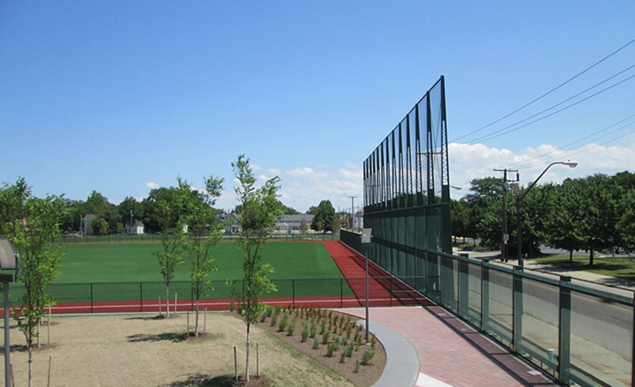