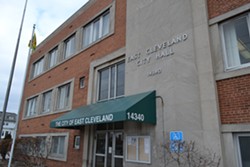 Still, the idea of East Cleveland floating a state loan — considered as recently as July by the auditor's office — is pretty much off the table now. “This office cannot support borrowing without a clear plan that eliminates the structural deficit," Yost wrote.

Johnson later vented to the East Cleveland Narrator, saying: “What I think is the most realistic option is filing Chapter 9 bankruptcy."

Mixed messages from the auditor's office and a genuine lack of a restructuring plan at City Hall leaves East Cleveland in, well, in the same spot the city has been in since descending into "fiscal emergency" in 2012 (calling back another 17-year "fiscal emergency" stretch from 1988 to 2006).

"East Cleveland is in a class of its own," Yost told Scene in a phone interview earlier this year. Not much has changed since. "They're in fiscal emergency, and nobody's had the size of structural deficits that we've seen in East Cleveland, nobody's had them going on as long, and no city has done as little to correct the problems."