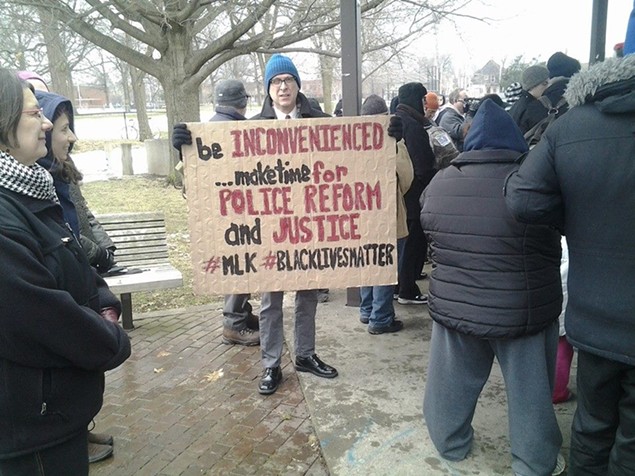 Cleveland Police arrested three people on the Detroit-Superior Bridge during the first of two "unity marches" Monday. Protesters had gathered at the Cudell Rec Center and walked nearly four miles to downtown to protest police violence and advocate for community involvement in ongoing discussions about police reform.

The arrests occurred near the tail end of the West Side March, which began at about 1 p.m. Police were physically trying to confine marchers to one lane before they entered downtown.

Michael Fiala, 60, David Steinmuller, 29, and Edward Lessin, 74, (who goes by "Norm") were arrested for aggravated disorderly conduct, a charge that police spokespeople said they couldn't clarify until an official police report had been submitted.

Below, view the arrest of Fiala, who literally had just fallen down as police and protesters pushed and shoved.  (Video appeared on local activist Don Bryant's YouTube page).

Councilman Brian Cummins, who participated in both of Monday's marches, said he suspected the police were trying to make a statement:

"They wanted to make it known that they were serious," he told Scene in a phone conversation Tuesday. "I think [those arrested] may have been on the fringes, or were straggling a bit, but there was clearly a lot of confusion when it occurred. By and large, people didn't want to be arrested and were generally moving forward in an attempt to comply. It seems really unfortunate that this happened, particularly on MLK Day."

Here's Steinmuller, before his arrest, with his daughter:

Local activist Rachelle Smith, who attended the march, said she thinks police may be factoring protesters' resistance into Fiala's charges. As is evident in the video above, he submits peacefully and without struggle. And once again, though It's not clear here, additional footage posted to the #OrganizeCLE Facebook page shows Fiala falling to the ground moments earlier.

Shortly after the arrests, in a bizarre turn of events, police cruisers halted the protest — "They sandwiched us in," said Cummins — and threatened to make more arrests because a commander had lost his Blackberry. Police assumed one of the protesters had stolen it during the commotion.

And then, to lighten the mood:

"We figured if indeed the commander was still using a Blackberry, he was eligible for an upgrade," Smith told Scene in a phone conversation Tuesday. "They were screaming at us, and none of us has any idea what they were talking about."

Smith also said that as far as she knew, though the police ultimately let the protesters pass, the phone was never recovered. Police spokespeople have not yet responded to requests for comments regarding the commander's phone.

Both Fiala and Steinmuller — "the most passive 29-year-old you will ever meet," said Smith — will be arraigned tomorrow morning.