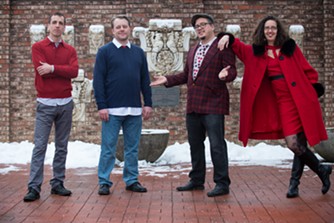 Last year, bassist Ed Sotelo and flautist Kathryn Metz, an ethnomusicologist who works at the Rock and Roll Hall of Fame and Museum, started playing Brazilian music as Bossa Novella. “Kathryn and I wanted to play Latin American music from different countries,” says Sotelo, who describes himself as a “dude whose parents are from Argentina but was born at Metro.”

The band has since expanded to include percussionist Geoffrey Peterson and violinist and mandolin player Jeff Schuler. Rechristened Chamba Music, the group played a few shows last summer on the patio at Luxe. It kicks off a residency at the Happy Dog at the Euclid Tavern on Thursday, April 16.

“We’re concentrating on Brazilian music right now,” says Sotelo. “Some Brazilian tunes have made it into the jazz canon. That’s an easier point for us to start. Some of the the Brazilian stuff is easier to handle if you’ve ever heard any jazz. I grew up listening to traditional Argentine music, but I didn’t learn how to play it.”

The band is slated to play the Happy Dog at the Euclid Tavern again on Thursday, May 21, and on Thursday, June 18. The concerts will take place from 5 to 8 p.m. and admission is free. Sotelo adds that the band plans to do more into the summer.