Akron Mayor Don Plusquellic to Retire at the End of the Month, is Through With "the madness" 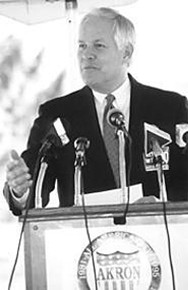 Akron Mayor Don Plusquellic will retire at the end of the month, he says, ending a decades-long tenure as the Rubber City's top official.

Citing ongoing coverage in the Akron Beacon-Journal regarding a feud between himself and councilman Bob Hoch, Plusquellic said in a letter to Akron residents that he is through "fighting the madness."

Akron's Council President Garry Moneypenny will assume the the Mayor's desk when Plusquellic leaves, and Plusquellic signaled his support of Moneypenny in the letter.

But the Bob Hoch situation apparently was too much for him to deal with. He had officially uninvited Hoch from his State of the City Address this year, suggesting that Hoch would try to shoot him if he showed up. That sentiment didn't sit well with council or residents, and Plusquellic has been dealing with the fallout ever since.

“The good people of Akron deserve better — they deserve the truth,” he wrote in his letter. “I do not believe that my hometown paper is interested in the truth.”

Plusquellic was first elected to Akron City Council at the tender age of 24 and has been Mayor since 1987. In a 2003 Scene profile,  we called him a "Mayor for Life" and theorized that with his Akron roots and immense popularity, he could basically keep his job indefinitely.

Jump to comments (1)
Tweet
Email
Print
Share
« Scene Podcast: Brent Kirby On His N…  |  Cavs Thoughts as Game 3 Gets Under… »