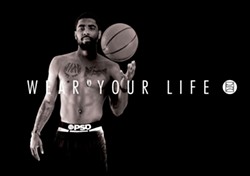 As if sporting the Kyrie Irving's custom jerseys, shoes and socks wasn’t enough, diehard fans can now wear the same underwear as the young star too.

The young Cavs point guard is hoping to get in fans' pants with the upcoming launch of an underwear line by PSD this August. His first signature collection for the premium underwear company will feature a series of six custom boxer briefs.

"When (PSD's president) approached me about getting more involved with PSD, it was an easy decision since I already wear the brand and love the style and comfort," Irving said in a PSD press release.

Irving will be tasked with helping to create a new collection every season as he is what the company calls its "trend spotter." Word has it that several thousand Summa employees have already submitted pre-orders.