Update: The hubbub continued this week as the "Rock House" was partially unveiled to friends and guests as part of a "stress test." Thanks to YouTuber TnT Kids & Home, here's some video footage from the event:


The Bar Rescue crew has also recommended a name charge for the establishment: Tim Owens' Traveler's Tavern. Final filming is tonight at 10 p.m. It's recommended that any folks who want to participate get there early. -AN

Tim "Ripper" Owens may remember this week as the week from hell or the week that saved his Akron restaurant, "Rock House." The former lead singer of Judas Priest (no, not this one) is hosting the loud, and often angry, Jon Taffer and the rest of the "Bar Rescue" crew. Owens follows a storied lineage of rock and roll stars opening flailing restaurants in northeast Ohio (See: Alice Cooper's Cooper'stown). The show, airing on Sunday nights at 9 p.m. on Spike TV, has spent the entire week working with Owens while exposing him to all kinds of reality television hijinks, name calling and overwhelming stress. 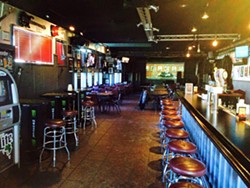 One of the staples of a "Bar Rescue" episode is the taped "stress test" where the show runners basically shove as many people as they can down the restaurants throat and then verbally abuse the staff and owners when shit hits the fan, which it always does. Then, lessons learned and occasional hugs take the audience at home to the next commercial break. Owens hopes these lessons will save the Rock House.

The Rock House has been able to keep its doors open for two years as competition comes and goes but Owens told the Akron Beacon Journal that the restaurant has never been in the black and continues to lose money every day.

Owens' hellacious week will conclude with the reveal of the "Rock House's" makeover by the "Bar Rescue" crew. "Bar Rescue's" makeovers are rarely modest so make sure to head out to the Rock House at 2727 Manchester Road after Saturday to see what reality television can do for a failing bar/restaurant.