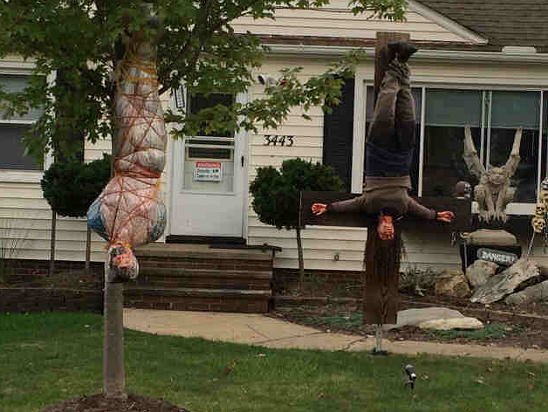 Update II: Today in Parma Halloween decoration news, we've discovered the Barrett family has decided to re-install their controversial dead body display after receiving an "overwhelming response from the community" (and probably a few Scene readers).

In a statement to Fox 8, the Barretts stand by their choice of decor:

The decision to put the display back up was the overwhelming response from community. We had police officers visit our home offering protection if we decided to put [it back] up. Parents stopped by saying their kids were upset we took it down. We also received some weird mail that was unwelcomed. After a lot of debating, it came down to the fact IT’S HALLOWEEN and we don’t like plastic pumpkins or skulls. HAPPY HALLOWEEN.”

Update I (posted October 12, 2015 at 7:48 a.m.): The Barretts have decided to take down the controversial Halloween display after days of attention that ultimately made the Parma family feel unsafe, Fox 8 reports.

"I came down one night a little bit after midnight and happened to see stuff flashing in my front yard and looked out my window and our front yard was full of people that we didn't know," Vicki Barrett told Fox.

When asked if she will put up any alternative decorations this year or ever again she said it was unlikely. "I don't think we even want to do anything."

A Parma family is under fire this week after their rather graphic Halloween display caught the eye of community members, many of whom send their children to a nearby elementary school, Cleveland 19 News reports.

The display depicts several "dead" bodies, all of which have met their fate in a most unfortunate and gruesome way.

"Shock," Jackie Anselmo says is her reaction to the decor. "You take a double take because it is a very realistic display. Almost horrified that somebody would think that it's okay to put it that close to an elementary school," Anselmo tells WOIO.

[Anselmo] was so troubled by it that she took a picture and emailed the city to try to get the display taken down.

But Parma officials say there is nothing they can do about it because the display represents freedom of expression.

We wanted to hear what the homeowners who put up the display had to say.

"We don't want to scare kids. We just want to do the Halloween fun of it and but definitely no ill intent, no," explained Vicki Barrett.

Barrett says she and her husband haven't had any complaints. She says she even has a two-year-old and a special needs teenager and
would never do anything to purposely frighten children.


No word yet on what the Barretts plan to dress up as for Halloween.