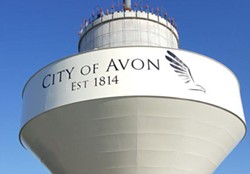 Thursday morning, the City of Avon watched as a gigantic new water tower at the corner of Mills Road and Rt. 83 was lifted into place.

It will be the western suburb's second water tower and has been under construction since October, 2014.

It has a capacity of roughly three million gallons — for comparison, Avon's current tower, which will stay in service, holds only 750,000 gallons — and was necessary, according to council and city engineers, for the city's ongoing development and consequent water needs.

The skyline out there will ne'er be the same.

Jump to comments (0)
Tweet
Email
Print
Share
« Cedar Point Worker Arrested for All…  |  Still Evil After All These Years, D… »